September 8, 2014 by Preston Toulon No Comments 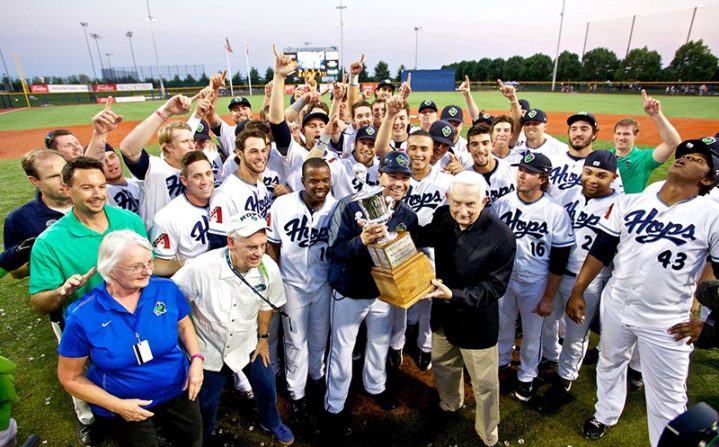 Incredible. Amazing. And most of all… perfect.

The Hillsboro Hops on Sunday beat the Vancouver Canadians, 4-3, to clinch the Northwest League championship. The win came at Ron Tonkin Field on a warm evening in front of 3,328 delirious fans. Hillsboro won its first title, in just its second year of existence.

In so doing, the Hops snapped Vancouver’s streak of three straight championships. The Canadians fell one shy of Spokane’s league record of four straight titles, from 1987-90. It was the first time in Vancouver’s four years as a Blue Jays’ affiliate that they did not win a crown.

Leading the best-of-three series one game to none entering play Sunday night, the Hops were flying high after a 7-5 come-from-behind win at Vancouver on Saturday. And they used that momentum to build a 4-0 lead after two innings.

Hops right fielder Stewart Ijames singled home a run in the bottom of the first to make it 1-0. Four batters later, Jordan Parr — who has spent his entire career as a Hillsboro Hop — hit a bases-loaded double into the right-field corner to make it 3-0. And Hillsboro added a run in the second when Taylor Ratliff scampered home on a wild pitch that skittered a mere 10 feet from home plate.

From there, it was up to the Hops’ pitching staff, which had the lowest ERA in the league (3.64) during the regular season.

Hops starter Felipe Perez gutted his way through five innings, allowing five hits and a walk, but just two runs. Nick Baker threw an inning and two thirds, allowing his first run in his last seven games. And although Rob Wort allowed an RBI single by Vancouver’s Ryan McBroom which cut the lead to 4-3, he got the final out of the seventh on a booming Rowdy Tellez drive to center caught at the fence by Ratliff.

Enter Luis Ramirez — “Toro,” to his teammates — for the top of the eighth. Ramirez, pitching a year and four days after Tommy John surgery, worked a 1-2-3 eighth. That set the table for southpaw Zac Curtis in the ninth.

The Northwest League’s regular-season leader in saves — he had 14 in 15 chances — came in to work the ninth and try to earn his fourth save in four Hops’ postseason games. Curtis retired Vancouver’s dangerous leadoff man, Roemon Fields, on a comebacker, but then walked the Canadians’ speedy number-two hitter, Tim Locastro. Shortstop Franklin Barreto — an excellent prospect, and perhaps the league’s MVP — struck out swinging on a fastball.

The Hops were an out away from the championship, and Vancouver’s cleanup hitter, Chris Carlson — an on-base threat, not a power-hitter — was at the plate. The count went to 1-2, and Carlson hit a one-hopper back at Curtis. It caromed off Curtis, and popped just above his left shoulder. Curtis bare-handed it, jogged toward first, and tossed it to Kevin Cron.

The win capped an amazing run for Hillsboro, an affiliate of the Arizona Diamondbacks. The Hops won 18 of their final 21 games, including each of their last eight. Their overall record was 52-28 (regular season and postseason combined), the best in all of Short-Season Single-A baseball. And the championship was the 10th in the 110-season history of Portland-area professional baseball teams-the Hops join the Portland Beavers of 1906, ’10, ’11, ’13, ’14, ’32, ’36, and ’83, and the NWL Portland Rockies of 1997, as the only Portland-area professional baseball teams to win league championships.

Perez was the winning pitcher. Curtis picked up his 18th save in 19 chances overall, and fourth in the last six days. In 20 appearances since June 30th, the left-hander from Middle Tennessee State University allowed just two runs (one earned), while converting 14 consecutive save chances.

Ratliff finished the postseason 6-for-15 with six runs scored, including at least one in each of the Hops’ four games. Ijames was 5-for-14 with two long home runs. And Nate Robertson was 5-for-12 in the playoffs, with a double and two triples.

Hillsboro’s bullpen was superb during the playoffs. In 19 innings, Hops relievers allowed 12 hits and three runs, with nine walks and 24 strikeouts.

Hops manager J.R. House earned a ring in his first year as minor-league skipper. And it was the second championship for Hillsboro owners Mike and Laura McMurray, who had won a title with the Yakima Bears in 2000.