Should Sean Mannion Bolt for the NFL? 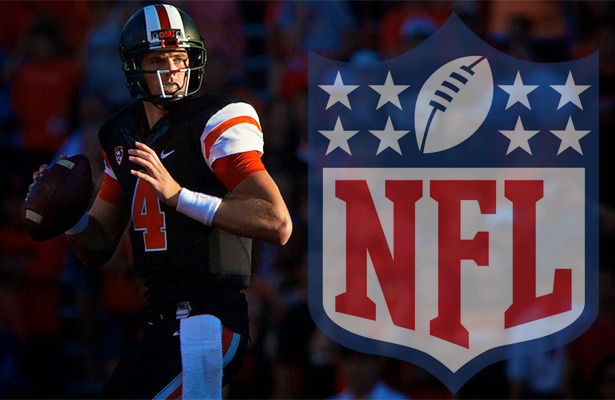 There’s hardly much conventional wisdom when it comes to kids leaving college early to become professional athletes; there’s a camp for both sides of the argument.

Camp one says to stay all four years in an effort to maximize your athletic growth while also achieving a very worthwhile education, and degree, in the event pro sports doesn’t work out.

However, camp two says to leave when your “draft stock” is at it’s ultimate high and to avoid risking catastrophic injury, which could very well result in a smaller pay day if, or when, you go pro. These examples are just the tip of each iceberg, as this is a debate that will rage on each and every year in every corner of collegiate athletics.

In the case of Oregon State’s junior quarterback Sean Mannion, the decision to stay or leave has slowly gained a full head of steam as the wunderkind from Pleasanton, California is putting together a season, statistically, that Beaver Nation hasn’t seen since the days of Derek Anderson.

(Although Anderson passed for just over 4,000 yards as a junior, he chose to stay with Oregon State for his senior season, adding one more year of development, while breaking some school records in the process).

In terms of Mannion’s “draft stock,” you could make a very strong argument that it’s at a “leave college early” type level as he nears the end of his junior season. In regards to his development (which is rearing an ugly side of itself after OSU’s last two games) you could also make the argument that it is in his best interest to stick around another year, and fine tune his game even further.

If you remove Oregon State’s last two games (contests against USC and ASU), Sean Mannion had compiled 3,263 yards passing and 30 TDs, while tossing just three interceptions. Even with the loss to Stanford, Mannion was putting together a season for the ages, and was beginning to draw national praise as his name was brought up in early discussions for the Heisman Trophy.

When you add the last two games, both losses, to Mannion’s season statistics, they begin to tarnish his resume a bit. While the yardage numbers on the year are still gaudy, Mannion has tossed just 3 TDs the past two games, while throwing 7 (you read that right) interceptions.

Performances like his last two are stark reminders that the 21-year-old signal caller could use one more year in Corvallis.

There are a few caveats to thinking Mannion should stay, however. First of all, there’s a very significant chance that his go-to receiver, Brandin Cooks, bolts for the NFL as his own “draft stock” is soaring right now. Not only has Cooks amassed a total of 1,628 yards (receiving plus rushing) and scored 16 total touchdowns, he’s just been named a semi-finalist for the Biletnikoff Award, which recognizes the nation’s top wide receiver. Cooks has a legitimate shot at taking home that hardware, so it’s very logical he decides to make the jump to the NFL following his own junior season.

The second cautious factor for Mannion is the injury concern. That’s not to say Mannion is in any way injury prone, but he did miss a few games last year due to an injured knee (he had surgery to repair a torn meniscus, but returned to the Beavers that same year). Oregon State does have a top flight sports therapy crew working for the football team, but that doesn’t necessarily give him an outright chance to avoid injury; at any level, risking injury is just part of the job description.

If he does decide to go pro after this season, he’d likely join a very deep quarterback draft class with people like Johnny Manziel, Marcus Mariota, Teddy Bridgewater, Derek Carr, Brett Hundley, AJ McCarron and Aaron Murray, to name a few. That’s a heck of a draft class, and if Mannion has any desire to be drafted on the first, or second, day next April, he’ll likely want to stick it out for his senior season and take a shot at the 2015 NFL Draft.

Now while that is looking at it with monetary concerns in mind, Mannion could be the type that just wants to get to the league as soon as possible, and with his skill set, be willing to make the jump pre-maturely and begin getting professional level coaching one year earlier.

Mark Sanchez left USC after just one year as the sole starter for the USC Trojans, and while he was drafted 5th overall by the Jets, he was one of only five quarterbacks taken in the first four rounds of the 2009 Draft. A decision that worked wonderfully for him as he was able to secure a hefty payday, and become the franchise quarterback for a struggling Jets team. As mentioned above, this year’s quarterback class is absolutely loaded, even if guys like Mariota or Hundley decide to stick around for another year.

For Mannion’s potential to be fully developed, he should return to Oregon State for his senior season, build on what he’s put together this year, and prepare for the 2015 NFL Draft as one of the premiere quarterback options. His recent lackluster performances exemplify the reason for him to don the orange and black for one more year, with or without his star receiver.

It may be a pipe dream for fans to see him return, however, as Beaver Nation has witnessed Jacquizz Rodgers (football), and Jared Cunningham (basketball), two top-flight athletes in their respective sports, bolt for the pros early when many signs could’ve pointed to them returning to campus.

However it plays out, Mannion has certainly left his mark on OSU football, and is not done cementing himself in the Oregon State record books.