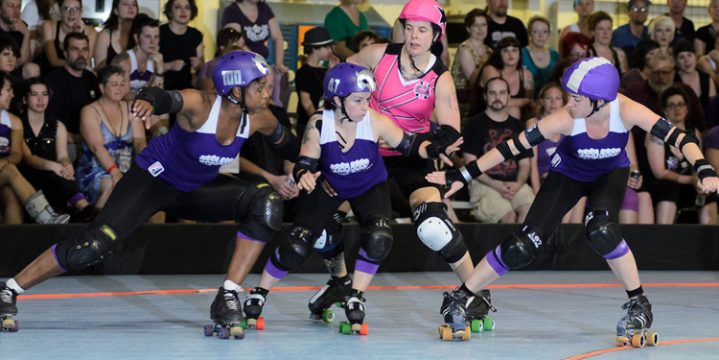 Portland is a proud home to many of the nation’s most exciting alternative sports, and the Rose City Rollers roller derby league proves to be a fan favorite year after year. The league has been at the heart and soul of Portland derby culture since its founding in 2004 and is celebrating its 10th anniversary this year. October is host to only two Rose City Rollers events in Portland, and both are coming up this weekend. Skating is slated for this Saturday and Sunday, Oct. 11 and 12, at The Hangar at Oaks Amusement Park in Sellwood.

Saturday night’s bout pits Portland’s Guns ‘N’ Rollers against Salem’s Cherry City All-Stars. Doors for the evening event are at 6, with the match scheduled to run from 7–8:30. General admission tickets are still available and cost $14. Kids six and under are admitted for free. Bouts often sell out early—guaranteed seating tickets for this match are already gone—so it’s best to buy your passes online ($15.72 after fees) before the event.

Guns ‘N’ Rollers are one of four home teams in the Rose City Rollers coalition, which is comprised of about 400 fearless and ferocious females ranging in age from seven to 60. Along with its home teams, Rose City Rollers has one expansion team, two traveling all-star teams, a high school league and a recreational program. Guns ‘N’ Rollers’ roster features 20 rough and tough women roller skaters donned in black and pink. The squad is known to be a fierce force on the floor with a flair for rock-n-roll, though it went 1-3 this season against the league’s other home teams in the January–April regular season.

The Cherry City All-Stars represent top athletes from Salem’s Cherry City Derby Girls league, which, along with the Rose City Rollers, is part of the Women’s Flat Track Derby Association. Salem’s league also features two traveling all-star teams and four home teams along with youth and recreational programs. The all-star group appearing at Saturday night’s bout is not one of the league’s traveling teams but rather is a specially formed group of the league’s leading competitors from its other squads.

Sunday brings more roller derby to the city of Portland with a double-header event featuring the Rose City Rollers’ junior derby teams. The first bout, set for 1 p.m., is between the two home teams in the Rose Petals program, Daughters of Doom and the Voodoo Dolls. The Rose Petals league is for girls between the ages of seven and 12, and it also includes a traveling all-star team. Tickets are $7 and are good for both bouts of the double-header, with children six and under admitted free of charge.

The second matchup in Sunday’s junior derby competition, slated to start at 2:30 p.m., is between Rosebuds home teams Little Red Riveters and Death Scar Derby Droids. The Rose City Rollers’ Rosebuds program features skaters ages 12–17 and is made up of four home teams, an all-star traveling team and an introductory training program. The $7 double-header admission price covers entry for both bouts on Sunday, and tickets can be purchased online or at the door.

Every Rose City Rollers event promises Portlanders endless excitement and entertainment—and with just two bouts on the calendar for October, now is the time to catch some skating action. Whether you’re a diehard derby devotee or a casual connoisseur of the city’s diverse athletic activities, grab your tickets and head to Sellwood for a wonderful weekend of Rose City roller derby.