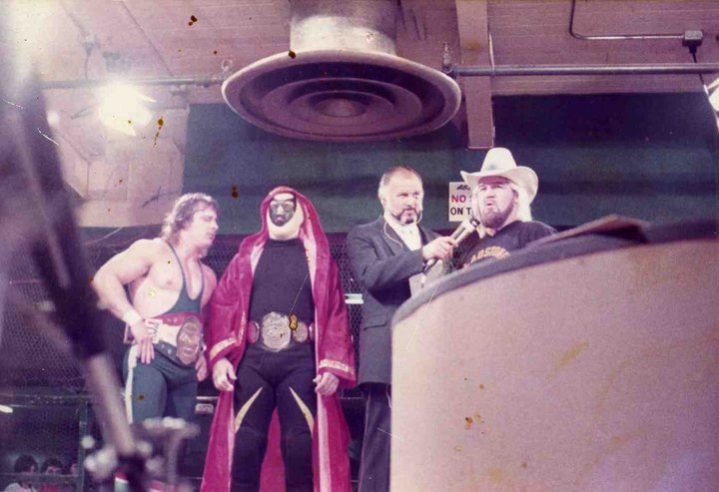 I may have to cancel my subscription to the WWE Network.

See, I  use the Network as both a way to keep tabs on the sport (athletic entertainment), pro wrestling as a business model and even learn about good (and bad) “storytelling”. So when I searched  “Portland Wrestling” or “Playboy” Buddy Rose on the WWE Network, two episodes of Monday Night Raw from 2007 and 2010 came up as well as three clips featuring Rose’s match with Kerry Von Erich (Texas Tornado) from 1987-1990 Saturday Night’s Main Event. For those new to the game, this was after Rose helped put over Portland Wrestling in classic heel (later turned babyface) fashion for a “golden era” run, eventually parlaying his Pacific Northwest Wrestling experience in the ring and his ability to basically make you hate him, into a then-WWF run that is memorable to anyone who grew up on Portland Wrestling.

When I was between 10 and 12 years old,  PW was a Saturday night ritual at midnight. KPTV Channel 12, brought to you by Tom Peterson from the Portland Sports Arena. As a kid, I hated to miss a show and created this nice balance while also growing up on WWF and WCW (AWA/NWA). Regardless if you shared a bedroom in the garage with two of your older brothers, adjusted rabbit ears or recorded the shows on Beta or VHS, chances are if you were a fan then…you are still a fan of the history of Portland Wrestling today.

Bottom line: Portland Wrestling was one of the best developmental territories in the business during its peak, complete with endless stories in and out of the ring to share and learn from.

Thankfully, there are guys like Rich Patterson around. “Captain” has kept Portland Wrestling fandom alive since he was a kid himself. One match. One VHS tape at a time. Patterson — the long time radio network producer for the Portland Trail Blazers since 1991 — is also a Portland Wrestling Historian and was the perfect guy to help kick off this series, looking back and forward at Portland Wrestling and those long-lost “Playboy” Buddy Rose videos.

You can connect with Rick Patterson on Twitter at @richpatterson1. (*Note the clips featured below all derived from footage Patterson restored from Buddy’s own personal collection.)

Pacific Northwest Wrestling and Portland Wrestling started in 1925, really experienced its heyday in the 70’s and 80’s before that golden era declined into the early 90’s. When did you start getting into the scene and why?

My family watched Portland Wrestling, so I’m sure I watched it at a very young age.   I must have enjoyed it, because I kept watching every week until PW went off the air in December 1991.

My earliest memories of watching PW was seeing Dutch Savage (when he was a heel) screaming at the camera that he was going to kill someone.  I don’t remember who he was talking about.  Other early memories are when Tony Borne & Lonnie Mayne were in the Crow’s Nest for an interview.  As usual, Borne wouldn’t let Mayne talk & was slapping him.  Lonnie’s Dad, Kenny Mayne came up and started yelling at Borne, who attacked Lonnie’s Dad, blooding him up.   I also remember being on vacation with my family in July 1971 and having to watch PW.  That night, Kangaroo Johnny Boyd won the PNW belt from Kurt Von Steiger.   After Boyd won, Kurt & Karl Von Steiger proceeded to make Boyd a head to toe bloody mess.

To this day, even watching it in black & white, Boyd was as bloody as I can remember anyone being in PW history.  That’s when he announced that he was bringing his cousin, Norman Fredrick Charles III to Portland.  The first time I ever saw Portland Wrestling live was in August 1971.  I was nine years old.  The main event was the Royal Kangaroos against Ed & Bill Francis.  It was a bloodbath.  Being a believer, I didn’t want to see the blood.  To this day, I remember trying to look like I was watching the action.  In fact, I was staring into my brother’s shoulder, so I wouldn’t have to see the blood.

In my early days of watching, I always thought that when the World Champion, such as Dory or Terry Funk, came to town Savage, Snuka, Boyd, Ramos or whoever was facing them could actually win and become the new World Champion.

How would you describe the territory and business of wrestling at that time? Is there one guy that you were a big fan of?

I was really too young to know about the business of pro wrestling. I just know that the wrestling magazines rarely, if ever, wrote about our wrestlers.  I was a big fan of Kangaroo Johnny Boyd.  As a kid, I just thought he was pretty damn cool & pretty damn mean.  He was one guy that could take a beating and you knew he would come back.  After being out of the area for about eight years, I remember the night when he came back to Portland in 1989.  He was bald and just wasn’t the same Boyd.  I was also a big fan of Jimmy Snuka when he first came to Portland.  He was called “Big Snuka” at the time.  Once I got older and knew that pro wrestling was entertainment, I just enjoyed watching. It was fun to watch and be surprised when guys like Stan Stasiak, Lonnie Mayne, Buddy Rose, Jay Youngblood or Bull Ramos would return to TV after being gone for some time.

We are really talking about some big names that were prominent when Don Owens was booking the territory and shows were on KPTV — Roddy Piper, Jesse Ventura, Ric Flair, Jimmy “Superfly” Snuka, Curt Hennig. But there was also a blend of guys like Buddy Rose and Billy Jack Haynes for example. Who really was the face of Portland Wrestling?

I would say that the face of PW when I started watching in the early 70’s was Dutch Savage.  When Playboy Buddy Rose debuted in August 1976, he made a mark on PW that few, before or after, did.  In 2005, I had lunch with Buddy at his favorite Chinese food buffet restaurant in Vancouver.  I had already had my food and had been sitting down for ten minutes before Buddy was able to have a seat.   Even though he was a “bad guy” for most of his time in Portland, the fans loved him & he loved them right back.   Although he only worked in Portland for less than two years, Roddy Piper will quite possibly be considered the most famous face of Portland Wrestling.

Along with Billy Jack Haynes, the other local guy that became a huge star was Tony Borne’s son, Matt, who 1990’s WWF fans would know as Doink. Which is really a shame because Matt was great. We also can’t forget about Art “Beetlejuice” Barr, who became a huge star in Mexico after PW folded.

With “territories” coming to an end and the rise of “sports entertainment” with the WWF/WWE, that era of Portland Wrestling has come and gone. But you have a pretty impressive catalog and library from those days…

Yeah.  Buddy Rose and I became really good friends in the early 1990’s. I had mentioned that would love to see Portland Wrestling footage of guys like Lonnie Mayne, Jesse Ventura and Bull Ramos. He said that he had some, but he could play the tapes anymore because he didn’t have a player. He showed me one of the tapes.  It had “Mayne/Rose 10/77” written on it.

Then and there I knew I had to find a player.

It took a very long time, but found that the format was from a format that predated BETA and VHS.  It was called “The Quasar Great Time Machine.”  The machines weren’t made after 1978.   Long story short, it took another year to find a machine and get it repaired. Buddy had about 40 of these tapes.  But they had been stored outside, so they collected dust and mold. When I would play the tapes, that mold would gum up the machine & I would have to get it cleaned.  Over $1,000 later, I had gone through these tapes and found the only footage known of Lonnie Mayne, Jimmy Snuka and Jesse Ventura from their Portland days. I also was able to restore footage of how the infamous Roddy Piper/Buddy Rose feud started in the spring of 1979.

Buddy was known for taping Portland Wrestling, then going back and watching his matches to try and get ideas.  After Buddy passed, his widow asked if I wanted Buddy’s video tapes.  If I didn’t, she would just throw them away or give them to Goodwill.  Needless to say, there was no way I was going to let a tape that could have a classic match on it be taken to a dump or have “American Idol” taped over it. Buddy was notorious for not labeling his tapes.  So, it took me about four months to go through about 900 video tapes.  It was well worth it, as I collected about 275 hours of Portland Wrestling footage from 1980-1991.  In all, I have 300 hours of Portland Wrestling footage.

How much do you still watch or keep tabs on the business? What do you appreciate about pro wrestling now or could do without?

I really don’t watch any wrestling.  I haven’t really had interest since WCW went out of business. When competition went away, so did most of my interest. I DVR the local promotion in Portland, but I can usually fast forward past an episode in ten minutes. They simply don’t know how to “tell a story” or create an angle that lasts for more than two weeks. When the promotion debuted their TV show, they would have a “classic Portland Wrestling” segment with a clip of a classic match or interview.  They should have paid attention to those, as THAT is how a successful promotion was booked.

Going For The Three-Peat: Meet The Rose City Rollers Of The WFTDA