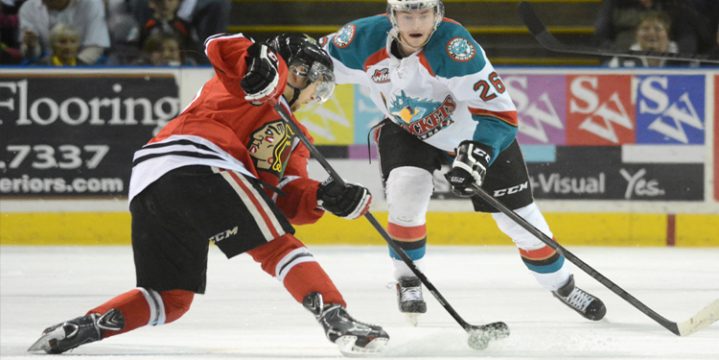 After a season that began with damaged confidence, the Winterhawks are on track to take the U.S. Division of the WHL for the year. With three games left, there’s small chance that Tri-City and Seattle can prevail over Portland’s momentum, and the stats finally show the Everett Silvertips behind by one win. By Sunday, the team will know if they can raise another banner in the VMC and claim that “five-in-a-row” boast from way back in September.

After hopefully sealing that, the Hawks will then have a hectic few weeks ahead of them. The first round of the playoffs means four games in a matter of five or six days, depending on the schedule assigned. The team has had a playoff spot clinched for a few weeks already, but it has just become certain this week that they will have home ice advantage for games 1 and 2 no matter who they end up playing. Their first game will be in the Memorial Coliseum and the second will be in the Moda Center. This will definitely help, with the games being back-to-back on March 28 and 29.

The real difference in this first round is centered on who the first foe will be. Portland will be pitted against either the Seattle Thunderbirds or the Spokane Chiefs for the first four to seven games of the tournament. As I’ve noted most of the season, the Winterhawks have a bad habit of giving away games to both teams, but are currently 3 for 4 against both. Last Friday’s sorry showing in Spokane’s Veterans Memorial Arena proved them the more recent threat, but Seattle pulled off a victory only last month.

That was on home ice for the Washington team as well, so perhaps the unfriendly crowds or the size of the venue is a factor. I’ve heard in the past that the VMC in Portland can be intimidating for visiting teams due to the sustained noise in the older, echo-prone space.

Of course, another factor might be some of the recent risks Coach Kompon ventured in the lineup. Two recent losses have coincided with Evan Johnson starting in the goal, for instance. It wouldn’t be accurate or fair to judge his ability by these two games and by all accounts he’s a very capable net-minder; it is very worrisome that Kompon would test his younger goalie against iffy opposition such as Calgary and Prince George. Surely one of the many games against Tri-City in the last two weeks would have given Johnson the minutes and teambuilding that Coach feels are needed. Those two games may have locked Portland into the number one U.S. slot sooner, and more firmly.

Hindsight and speculation aside, past performance this year shows that the Winterhawks would have a better shot at Round 2 of the playoffs going against Seattle rather than Spokane. Whichever it ends up being, things are looking good for us hockey fans south of the Columbia. Let’s just hope the team’s marketing gurus stick with “five in a row” as a rallying cry instead of “back-to-back-to-back-to-back-to-back.” Because that’s really hard to fit on the jumbo screen in the VMC.