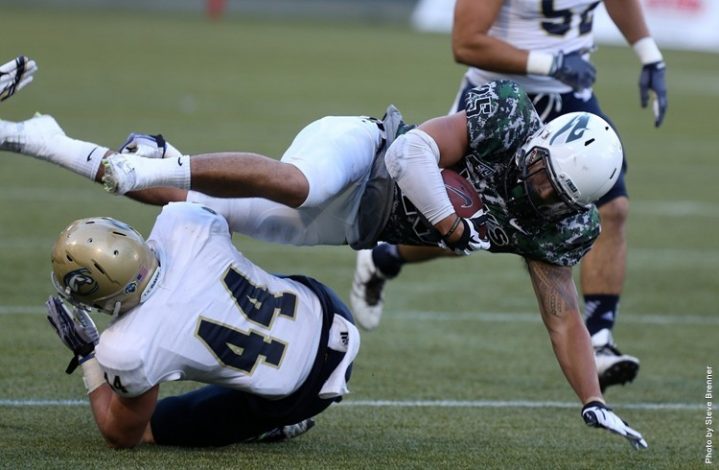 Portland State was solid in all facets of its game, picking up a much-needed Big Sky Conference-opening win over UC Davis, 23-14, at Providence Park.

The Vikings ground game was effective with 254 rushing yards; the defense stymied the Aggies, shutting them out in the first half; and an unlikely source – field goal kicking – was pivotal in the win.

With the victory, PSU opens Big Sky play at 1-0 and is now 2-3 overall. The win was also a big emotional boost for a Viking team that had started Big Sky play 0-2 each of the last two seasons.

Jonathan Gonzales booted a 53-yard field goal on the Vikings first possession of the game. The boot tied for second-longest in Portland State history and gave the Vikings a 3-0 lead.

Portland State extended that lead to 10-0 with a 12-play, 88-yard drive on its next series. Kieran McDonagh scored on a six-yard quarterback keeper.

Another lengthy drive, dominated by the Viking running game, ended in another McDonagh rushing touchdown. His three-yard score with 4:11 to go in the second quarter put PSU ahead 17-0 by halftime.

McDonagh notwithstanding, the star of the first half had to be the Viking defense. PSU held the Aggies to only 70 yards on 24 offensive plays. UC Davis had three three-and-outs and no drives longer than five plays in the half.

The Aggies showed some life early in the third quarter, taking advantage of a Patrick Wells interception of a McDonagh pass. On UCD’s first play from scrimmage London Lacy hit Keelan Doss on a 36-yard touchdown, making it 17-7 PSU.

When the Aggies produced a six-play, 62-yard scoring drive late in the third quarter, UC Davis had cut the Viking advantage to 17-14.

But the Vikings’ Gonzales made the difference in the fourth quarter. He added his second field goal of the night, a 30-yarder, three minutes into the period and it was 20-14.

PSU’s defense produced two more three-and-outs. When the Viking offense took over with 6:52 left, it had a chance to put the game on ice. And it did.

The Vikings ran 14 plays, including eight runs by sophomore tailback Nate Tago, in the series. The big play came on 4th-and-2 from the Aggies 45-yard line. Tago got the two yards to extend the drive and burn the clock. With 26 seconds to go, Gonzales made his third field goal of the night, a 19-yard kick, and the Vikings were winners.

Tago finished with a career-high 106 yards on 26 carries. Shaquille Richard, who started at running back, ran 16 times for 93 yards. McDonagh completed 19-37 passes for 194 yards and two interceptions. He also rushed for 33 yards and the two first-half scores.

The Viking offense controlled the ball all night, running 94 plays, converting 13-23 third downs and maintaining more than 35 minutes of possession.

PSU’s defense had its best night of the season, holding the Aggies to 240 total yards. The Vikings shut down UCD’s running game, giving up only 44 yards on 21 carries. Viking Coach Nigel Burton expressed his pleasure with the defense when commenting on the risky fourth-down play the Vikings attempted and converted late in the game. “When coaches go for it on fourth down, what it really says is you are confident in your defense (if you don’t make it).”

Linebackers Anthony McNichols and Zach Berg and defensive tackle Junior Alexis had six tackles each to lead the Vikings.

“(The win) was ugly but effective, and sometimes those are the best ones,” said Burton. We know there is a lot we can fix, but we still got the win, and that is better than the alternative.”

The only field goal longer that Gonzales’ 53-yarder in Portland State history was a 55-yard boot by Pat Moore in 1975. Zach Brown twice kicked a 53-yard field goal in his career (2010, 2011) and Mike Erickson (1986) did so once… McDonagh has two rushing touchdowns in each of his three games against UC Davis in his career… the Vikings had 448 yards of total offense… PSU has won four in a row over UC Davis… Portland State travels to the University of North Dakota next Saturday for its second Big Sky Conference game. Kickoff is 11:30 a.m. PT and the game will on air on Rip City Radio 620 AM and www.ripcityradio.com.