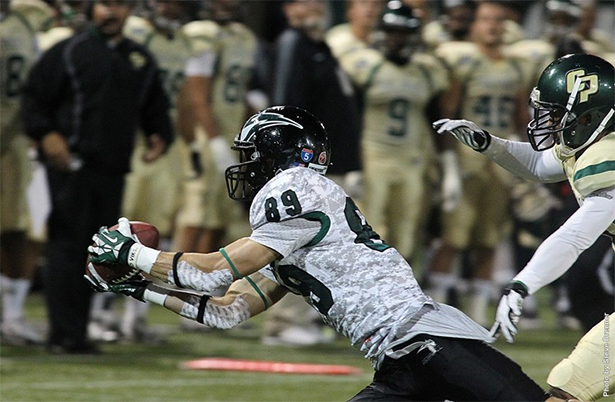 What started out as a college football ended up much like a heavyweight prize fight with Eastern Washington throwing the final fatal blow at Portland State.

The third-ranked Eagles beat the Vikings 42-41 at Roos Field to finish out a perfect Big Sky Conference season.

Going into the fourth quarter, the score was tied 21-21, but the teams exchanged six touchdowns in the last 15 minutes, including four in the final six minutes. When PSU scored to take the lead with exactly one minute left in the game it appeared the Vikings would have an upset win. Unfortunately, they missed the extra point and had only a 41-35 advantage.

The Eagles’ star quarterback Vernon Adams need only four plays and 29 seconds to get the tying score. Adams hit Cooper Kupp on a 15-yard touchdown pass with 31 seconds left in the game. Kevin Miller’s extra point put Eastern ahead 42-41.

PSU ran off five plays in the final half-minute but could only advance to the Eastern Washington 23 by the time the final gun sounded.

With the win, Eastern Washington finished the season at 10-2, 8-0 and will receive an automatic bid to the NCAA playoffs. The Vikings close out the year at 6-6, 3-5. Their last two games were single-point losses coming in the final minute.

“We were 13 points away from being 10-2,” said Viking Coach Nigel Burton, evaluating his team’s season. “I think sometimes you have to go through things like this. Hopefully, the juniors, sophomores and freshmen will realize they are tired of being close to great. They are good, but they need to realize how close they are to greatness. Sometimes you learn lessons the hard way.”

The contest was a thriller throughout with PSU going up 21-7 by halftime as Keiran McDonagh twice hit Kasey Closs on scoring passes. The Eagles came back to tie it in the third quarter on a pair of touchdown drives and set up the exciting fourth.

There were 1,131 yards of offense in the game with PSU getting 603 total yards. It marked the fifth time this season that the Vikings have had at least 600 yards in a game.

Between McDonagh, Collin Ramirez and Thomas Carter, the Vikings threw for 410 yards and four touchdowns. Ramirez and McDonagh each threw two TD passes. Closs had 11 catches for 191 yards and three touchdowns. Victor Dean made five receptions for 124 yards and the go-ahead score at the one-minute mark.

On the other side, Adams completed 34-56 passes for 457 yards, five touchdowns and two interceptions to lead Eastern Washington. He threw three TD passes in the fourth quarter. Cupp led the Eagles with nine receptions for 147 yards and two touchdowns.

In the fourth quarter, the Vikings struck first with Ramirez hitting Closs for a 13-yard TD and a 28-21 lead.

Four minutes later, Kupp caught an 18-yard scoring pass from Adams to tie it at 28-28.

EWU’s Quincy Forte made a 13-yard scoring reception from Vernon Adams to tie the game at 35-35 with 1:44 left.

Ramirez again threw a touchdown pass, hitting Dean with one minute left on the clock. PSU led 41-35 and that set up the final winning drive for Eastern Washington.

GAME NOTES: DJ Adams had his ninth 100-yard rushing game of the season and finished the year with exactly 1,600 rushing yards and 19 touchdowns… Closs finished the year with 1,167 receiving yards on 61 catches with eight touchdowns… Xavier Coleman had a big game on defense, making nine tackles, one interception and forcing a fumble… Dean Faddis also had a pick, while Kawika Stant and Mishawn Cummings recovered fumbles.

Blazers Taking the League by Storm