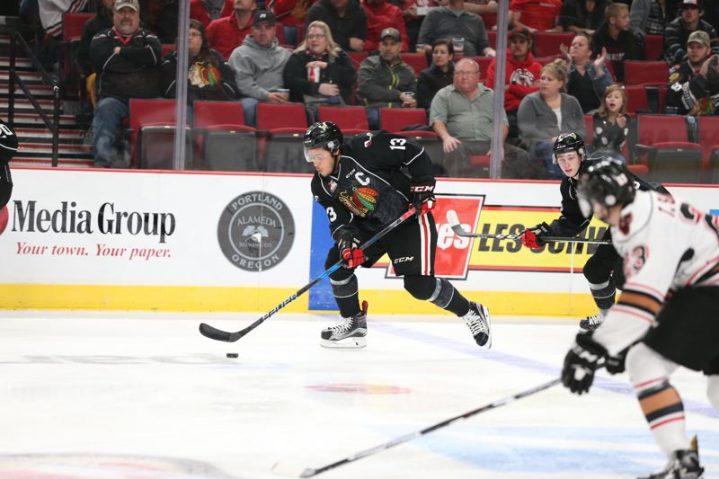 The nine-game losing streak is over, but it might be the defining moment of the season if the Portland Winterhawks can’t escape it’s negative momentum throughout November. With an upcoming five-game series at home, the team can’t afford it. They have teetered into a losing record and have plummeted to the bottom of the conference standings.

The Hawks have had just this one win in more than a month, a towering victory over the Calgary Hitmen, and that game served to show the fundamentals of the game that are necessary for Coach Mike Johnston to salvage his first year back in town. Here are three basic principles that are key to Portland’s survival during the long middle chapters of the season:

To start, scoring diversity is an absolute must for the Winterhawks forwards. The highlight of last week’s 9-2 victory over Calgary was Cody Glass notching a hat trick, but what won the game for Portland was Glass and his hat trick against the backdrop of Skyler McKenzie and Caleb Jones boasting four points each and seven different players scoring on Calgary goalkeeper Cody Porter. This is what had the Hawks hot during their road trip back in October, and it continues to be the team’s most impressive asset: playmaking, strong assists, and everyone hitting the back of the net equally. It’s much more intimidating to hit the ice against a wall of offensive pressure from ten different forwards rather than one handpicked line.

A way to encourage this unity and good team play would be for Coach Johnston to mix up the lines and incentivize assists as much as possible. The value of a helping hand is immeasurable in a league where everyone is trying to stand out and show off. It shows that the team and the win come before the individual career.

Another big factor is special teams. The big win on Calgary tells the story, with the powerplay team going 2/5 and the penalty-killing unit shutting down the Hitmen entirely. Calgary went 0/5 on the powerplay, which is insanely impressive and something of the last stand for Portland’s defensively minded maneuvers that started the season; even during this long losing streak the special teams have been curiously strong, and now this has become a necessity to keep a lead going into the back half of the game. Going along with this, a simple curbing of needless penalties would keep the special teams in reserve, and there have been plenty of penalties that the Hawks regret.

While we are on the subject of defense, the Hawks want to clearly avoid any shorthanded goals against them and keep an aggressive back-check to help out goalie Cole Kehler, who is decidedly overworked of late. The tipping point on a lot of the recent losses has been a sudden shorthander without any opposition at all. The simplest avoidance is a tighter puck possession in the neutral zone, but it’s also a question of positioning. Every player needs their territory clearly defined to avoid an opponent finding a pass out in open ice.

The Winterhawks defend home ice against first the Seattle Thunderbirds and then a slew of Canadian opponents from last month. Hopefully the long darkness is over, and the healing process can begin for everyone’s stats and the team’s ranking.