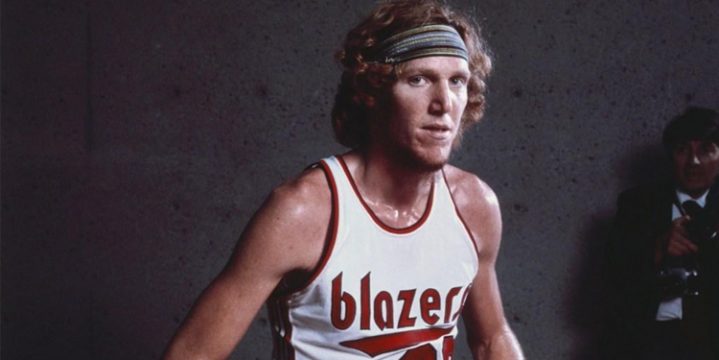 By Jared Wright | Courtesy of OregonSportsNews.com

Wednesday, November 5th is the birthday of former Portland Trail Blazers legend Bill Walton. He turns 72. Many of the older fans of the Blazers are familiar with the big redhead’s affinity for team basketball, his defensive and rebounding prowess, and his otherworldly passing skills. Unfortunately, he’s also remembered for being perpetually injured, both during his Portland days and later on in his NBA life.

The two years he was healthy, however, saw Bill Walton hoist the Larry O’Brien Trophy as an NBA champion.

When discussing Walton, you have to keep in mind that he’s a deep and complex individual. Such individuals are correspondingly complex to write about or discuss, especially, in Walton’s case, for someone from Portland. His time here saw him achieve both sports glory and suffer sports tragedy, both at the highest possible highs and the lowest of lows.

David Halberstam, recognized as the greatest basketball writer ever, used the late-70s era Trail Blazers as the subject for his magnum opus, The Breaks of the Game. I’ve never read the book, mostly because Walton himself has never read it. Walton is perhaps the most introspective, thoughtful athlete ever (except perhaps his nemesis, Kareem Abdul-Jabbar), yet he finds it impossible to read a book about himself.

[quote align=’right’]The Portland Trail Blazers have a history like few teams in the NBA. It is filled with as much triumph as it is tragedy.[/quote]When Bill Simmons, who used an interview with Walton as the epilogue in The Book of Basketball, asked him why, Walton said that it was a very special time of his life. He also said, grimly, “I know how it ended.”

How it ended was multiple foot injuries, a malpractice suit brought by Walton against the Trail Blazers on behalf of himself and several of his teammates claiming Portland provided inadequate medical care for their players, and Walton sitting out the entire 1978-79 season in protest when the Blazers refused to trade him.

What I’ve just described is the messiest sports divorce in American history, one Walton didn’t forgive the Blazers for until just a few years ago. In 1997, when ESPN ran a 30-minute spot on one of their channels commemorating the 20th anniversary of the 1977 champion Trail Blazers–widely acknowledged as one of the greatest basketball teams ever–they had Walton sitting in front of a camera, wearing a red Blazer polo and an expression that plainly said, “They’re paying me lots of money to do this.” The enthusiasm he had for that special team he captained stood out in sharp contrast to the uncharacteristic deadpan look on his face.

Walton suffered through great physical pain for most of his adult life. It wasn’t until major surgery on his spine that he was able to even move around without popping massive amounts of painkillers. After the surgery, he did part-time broadcasting work for the Sacramento Kings. For a legend like Walton, that might seem like piddling work–especially with a distinguished 19-year broadcasting career before his surgery–but in true Walton fashion, he didn’t mind. He was just happy to be able to move again.

The Portland Trail Blazers have a history like few teams in the NBA. It is filled with as much triumph as it is tragedy. The 1977 title team, Clyde Drexler’s early ‘90s Blazers teams that made multiple Finals in the most competitive era of the NBA’s history, Damian Lillard’s shot, a streak of playoff berths that ran longer than my lifetime until it was broken after the Jail Blazer era. Fans of the team have plenty to point to in terms of successes.

Conversely, there is also much pain in the team’s history: Drafting Sam Bowie over Michael Jordan, Jordan shrugging Drexler off–literally–when they met in Portland’s last Finals appearance in 1992, the Jail Blazers, Brandon Roy being forced to retire before he could claim the mantle of the NBA’s best shooting guard, drafting Greg Oden over Kevin Durant. For better and for worse, the Trail Blazers have made their mark on the NBA’s history.

It is William Theodore Walton III, however, that breaks my heart the most. Even though he would find redemption as the Boston Celtics’ sixth man on their title team of 1986, a team many people think is the best basketball team to grace God’s green Earth, Walton still remains the league’s greatest injury-related what-if.

Thinking about Walton reminds me of Lillard, another basketball star unafraid to speak his mind. Follow Lillard on Facebook or Twitter (like I have), or engage in his #4BarFriday movement on Instagram, and you’ll find thoughtful quotes, inspirational sayings and 140-character posts that have much deeper meaning than the usual asinine crap you find in social media. (Anthony Padilla, one half of the YouTube comedy duo Smosh, felt the need to tweet the increased length of his kitten’s you-know-what last night. I like the Smosh guys, but I don’t need that kind of info floating around in my feed).

Portland seems to be a place where well-spoken athletes go to find great personal success, then fall as hard and fast as they rise.

Walton won the franchise’s only championship, then fell apart in all possible senses of the phrase.

Drexler thrived as the athletic two-guard on teams that went to the Finals in 1990 and 1992, as well as winning a franchise-record 61 games in 1991. He then encountered Michael Jordan and fell into a tailspin; he eventually went to Houston, where Hakeem Olajuwon salvaged the latter part of Drexler’s career.

Roy, who was the breath of fresh air so desperately needed for the Trail Blazers in the 2000s, lost the cartilage in his knees. At the age where he should have been enjoying his prime and staking his claim as one of the best players in the league, he couldn’t even run without the use of painkilling drugs or artificial cartilage that wore out in a single game. He tried a brief comeback in Minnesota, but had to give up.

On Bill Walton’s birthday, I find it strange that my thoughts go from the first great Trail Blazer to the newest Rip City standard-bearer in Damian Lillard. Lillard’s already made a mark in Portland’s history for the better.

For the sakes of Walton, Drexler, Roy, and the denizens of Rip City, here’s hoping Damian Lillard doesn’t find tragedy to equal the triumph.

Get Up! Get Active! 4 Outstanding Options for an Awesomely Adventurous Weekend