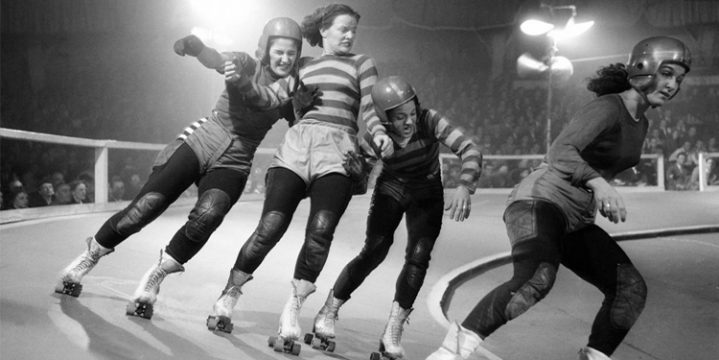 Roller derby is sometimes fast, sometimes slow. Sometimes skaters people are falling over each other in dogpiles, sometimes they’re going to the penalty box, and sometimes they seem to just be standing there, twiddling their thumbs. Plenty of first-time fans have walked away saying, “That was cool, but…how do they score points?”

Like any sport, you could write a book on that subject. Or, you can wrap it up in one sentence. In roller derby, the skaters with the starred helmet covers score points for their team by lapping opposing players.

Roller derby is played on a slightly skewed oval track. It can be played on a banked track (like most of gameplay in the 70’s), or on a flat track. Most leagues play on a flat track for logistical reasons. Flat tracks can be taped down in warehouses and chalked out in parking lots. Leagues with no startup funds can grab some skates and cones and start skating. On the other hand, banked tracks require purchase of the track itself, as well as a dedicated space to store it. Of the 1515 leagues worldwide, only about 22 play on a banked track.

Now, how does it work, exactly?

Five players from each team are fielded at a time on the track. Four players from each team are “blockers.” One player is a “jammer” and wears a starred helmet cover. At the beginning whistle, the jammers attempt to make their way through the pack of blockers. Each blocker is playing offense and defense at the same time — their job is to stop the opposing jammer, and to help their own jammer through if possible. Jammers, as we already know, want to escape the pack in order to circle back around and lap opponents to score points.

Jammers race for up to two minutes at a time. Each play, with a fresh lineup, is called a “jam.” Jams can be called for time at two minutes, or ended earlier for strategic purposes. How? The first jammer who exits the pack legally is called the “lead jammer” and can end the jam at any point by repeatedly touching her hands to her hips. Once the jam is over, whether it lasted ten seconds or two minutes, teams have 30 seconds to reset on the track with new lineups.

Though this contact sport sometimes seems chaotic, there are rules in place to keep everyone as safe as possible. Blocking and checking with the shoulder and hips is part of the game. Elbowing and tripping is illegal. Skaters can’t get an advantage by skating out of bounds (and you’ll often see a blocker hit an opponent out of bounds, then run back to make the out-of-bounds skater use up more time to re-enter legally). When a skater gets caught committing a penalty, they’ll be called off the track to spend some time in the penalty box, and their team skates short until the penalty time is over.

There’s a lot more to it, but that’s Roller Derby 101. Jammers juke, circle, hit, and dance their way through the pack in a fight to score more points. They sprint, stop on a dime, spin, get hit and chased and knocked to the floor, and then get up and sprint some more — all for up to two minutes.