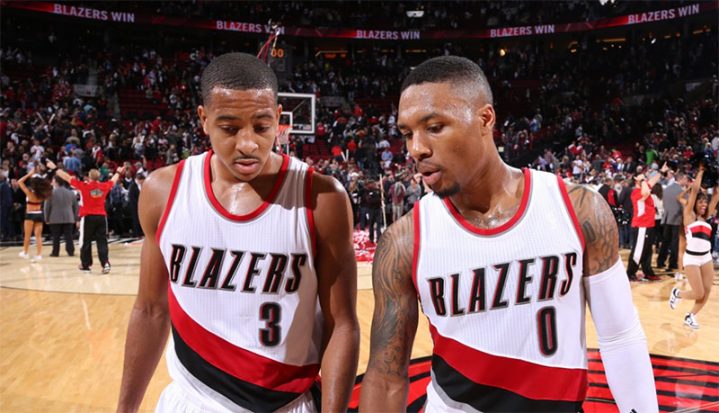 It has long been agreed, with few objections, that Damian Lillard is the best player on the Portland Trail Blazers. He is the team’s leading scorer and unequivocal leader. Owner of the phrase “Lillard Time” (take note Isaiah Thomas and John Wall) and forever a hero with “0.9”, Lillard’s status as a star is etched firmly in stone.

The last two seasons have also seen the rise of CJ McCollum, the most efficient shooter currently in the NBA. Winner of last year’s Most Improved Player award, McCollum is a rising star in his own right. If many thought Lillard got snubbed for an All-Star spot this season, then McCollum deserves the same outcry.  He and Lillard have combined to be one the NBA’s highest scoring backcourts.

But, the Blazers aren’t winning.

So, is it really working with these two on the same squad? Is it time to split them up? And if so, are we sure who it should be? Is Lillard still Portland’s best player?

The Blazers this season have become a dumpster fire beside a propane facility; a constant dance of one step forward followed by three steps back. The Blazers’ record now sits at 23-30, still within striking distance of the eighth seed of the Western Conference playoffs where the winner of that coveted spot will get the Golden State Warriors in the first round and an automatic early exit from the post-season.

If anything can be gained from this season, it’s the clarity that the tandem of Lillard and McCollum isn’t going to drive Portland to greatness. We’ve seen the ceiling of their offense while witnessing the deepening sinkhole they leave on defense.

Yes, the numbers are fine offensively for both, All-Star caliber in fact. McCollum has one of the deadliest crossovers in the league and Lillard is deadly when pulling up from beyond the arc on a second’s notice.

Lillard has long gotten the notoriety of being a clutch performer, but this season has tainted that reputation a bit.

Blazers' Damian Lillard 0-11 on clutch threes when game is within 3 points in last 3 minutes. Most attempts w/o a make in NBA. Also, 5A/9 TO

It’s been a while since we’ve seen Lillard Time. Some of that is on Damian, but a fair share of it is on the Blazers who have been blown out much more often this year.

And speaking of clutch–did you catch McCollum against the Dallas Mavericks last night? It was CJ who made the critical baskets down the stretch, including the game winning drive with .3 seconds remaining after Dirk Nowitzki made a remarkable three to give the Mavs the lead.

Now, you couldn’t make the argument to let go of one or the other on just offensive stats alone; they are both just too good. Defensively, however, is where the argument goes full tilt as to why the Blazers should split Lillard and McCollum. The Blazers will not win a championship with two starting guards who play terrible defense. It doesn’t matter if your guard combo scores 45 points per game if they are giving up 50.

Lillard and McCollum are two undersized guards who have neither the tenacity nor the size to lock down opposing backcourts who drool at the prospect of putting up large numbers whenever they see the Blazers on the schedule.

The lack of defense from the backcourt puts a ton of pressure on the frontcourt to make up for opposing guards blowing by both Lillard and McCollum. The Blazers may have inquired about trading for another big man, but would it help all that much? It would certainly be an advantage to have a rim protector, but that alone won’t vault the Blazers into a top-10 defensive unit, something required of a team before having even the faintest aspirations of a championship.

Portland still needs to stop shooters who routinely find themselves wide open from simple screens and ball movement. It’s not that Portland has been just bad on defense, they’ve been downright bottom-of-the-league bad. Though scoring 105 points per game, the Blazers give up nearly 110 points. Opposing guards light up the Blazers like its Christmas every game night.

But who is the better (or, worse) defender? Here is a stat taken by NBA.com.

As you can see, when both players are on the court, the net rating of offense to defense is about equal. Which, in of itself, is nothing to pop a champagne cork over.

When Lillard is on the court without McCollum, however, it’s an unsightly -10.9, meaning the Blazers give up almost 11 points more to the other team. But when it’s just McCollum, with no Lillard, the net rating improves to -4.9. Again, none of these stats are anything to fawn over, but this might give us some insight into what we’ve long suspected; that Lillard is the weakest link in the Blazers’ defense. McCollum might never be known as a defensive stopper himself, but his defensive capabilities seem more respectable.

Lillard once said that he and McCollum were made for each other, and that may be the biggest problem. Their skill sets may be so alike they don’t actually complement each other.

Guard combos should work like any other relationship, varied enough in strengths and weaknesses while able to work in unison. McCollum and Lillard are both solid jump shooters, but neither can post-up against most opposing guards. Both struggle on defense so neither can take the more difficult backcourt matchup which is usually left to Evan Turner or Al-Farouq Aminu.

Right now, Lillard and McCollum are working on the same end of the teeter totter.

Lillard is still the face of the franchise and his popularity extends beyond the basketball court, with endorsement deals and a burgeoning music career adding to his arsenal of popularity. Lillard’s fan base is a rarity in Portland, one that reaches globally more than any Blazer in recent memory. It would be nearly impossible to trade that away without another excuse for a Portland riot.

McCollum is a lot like Lillard in demeanor and likeability, though it is usually Lillard that has to answer for how the Blazers are faring and give Lillard credit for at least being vocal about his team sucking this year. It would be interesting to see McCollum thrust into a more prominent leadership role, to see if he could carry the burden as well as Lillard. Unlike another former Blazer that left a couple of seasons ago, McCollum doesn’t seem to shy away from the spotlight.

The Blazers are likely to keep Lillard and McCollum through at least this season. But, it would be wise for the organization to look at every option and listen to every deal offered for them now and in the future. The Blazers cannot keep both and expect success at the highest level. That much is clear. What is not so clear, is which one is the obvious keeper.

The answer has always been Lillard. The answer today will most likely be Lillard. But, are we really sure about that?

John Stupak
John Stupak is a senior writer for Oregon Sports News since 2014. John has followed Oregon sports for nearly 30 years. He is a life-long Portland Trail Blazers fan and has had the privilege of covering the Portland Thorns of the NWSL. Along with everything sports, he is fan of movies and of quality television (sorry CBS) in his spare time.