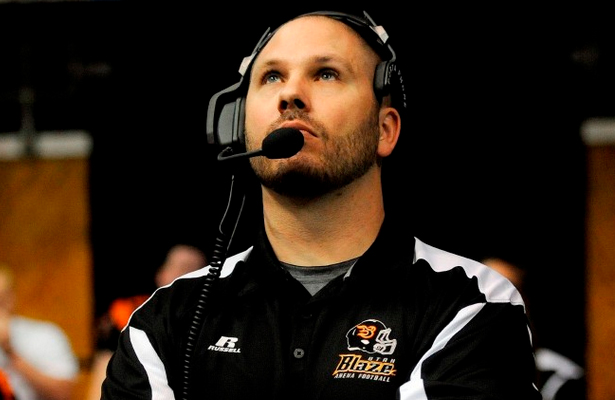 Football is coming back to Portland. And leading the charge is new head coach Matthew Sauk.

No stranger to success, Sauk brings with him a slew of offensive-minded awards. He’s one of the most decorated coaches in all Arena Football and comes to Portland after three seasons in Utah as the Assistant Head Coach and Offensive Coordinator of the Blaze.

Twice he’s been named the AFL Assistant Coach of the Year after writing and then rewriting the offensive Arena Football record books.

In 2009, after an eight-year playing career as a quarterback, he was inducted into the af2 Hall of Fame after throwing for 17,000 yards and 345 touchdowns. His coaching career began in 2008 with the Spokane Shock, then a member of the af2 – the Arena Football developmental league. In 2010, the team moved up to the AFL where Sauk led the Shock to an ArenaBowl Championship.

We had a chance to discuss the new franchise with him over the weekend, including his favorite team name submissions (the fans are voting on that this month) as well as when locals might get a chance to try out.

Jake Donahue: After your success in Spokane and Utah, what are your initial expectations in the first year?

Matthew Sauk: Our expectations will be to get better every day. With as many rookies as we will have on our roster it really comes down to consistently improving with every rep.

JD: How does Portland’s last arena team (in 1999) affect what you guys are doing today?

MS: It was a different league and a different model back in 1999. I think that with today’s model and with Terry (Emmert) as our owner, we will have the success that team wanted in 1999.

JD: Even though it’s been just a few weeks, how do you feel Portland has welcomed AFL so far?

MS: From what I have seen and heard, it seems the city is really embracing us. I think the city will love this game and the excitement we can bring to the Moda Center.

Arena Football is not only a great game for friends to go and enjoy, but also a family. My family goes to every game and my kids have a blast. Any time a song comes on that is played at our games, my two year old says, ‘Daddy’s Football!’ Try coming out to a game and you will be hooked.

JD: What’s the recruiting/signing process like? How does it differ from college or NFL? How is it similar?

MS: I would equate it to being more like college recruiting because with standard contracts and the single entity model, everything is equal around the league. In the NFL, you can offer a player just about anything as long as you are below your cap numbers.

JD: How do players react to getting an AFL offer when they expect to play for the NFL?

MS: Many players accept the challenge. I see it as a chance for that player to continue to work on his craft. When you are at home working out at the gym or running on a track, it isn’t even remotely close to the experience you will get actually competing against other players.

We strive to recruit the players who want to move up. We know those players are willing to put in the work. They are successful because they use their goals as motivation.

JD: If a player goes off the charts, can the NFL come and swipe him up? How involved will you be with the NFL scouts?

MS: With our league, the player is allowed to go workout or be signed by the NFL or CFL without restriction. If that player ends up being signed or has a workout we put the player on the Other League Exempt list. That just means if the player is later released, we retain his rights at the AFL level. I think our player personnel director Michael DiJulio has done a fantastic job communicating with NFL personnel. We have had over eight players go NFL or CFL in the last year. Not many teams in the AFL can match that.

JD: How important is it to get the local support in your first year?

MS: Local support is the life blood of any sports franchise. We hope to build up that support in and around Portland by putting a great product on the field.

JD: Will local players be able to try out for the team? How and when?

MS: We will have an open workout. That date has not been finalized but we will make an announcement. I know it will be well-attended and I look forward to having at least a few people earn an opportunity to compete in training camp.

JD: It’s a pipe dream for many locals, but do you think a successful AFL team might lead to Portland ever getting an NFL team?

MS: There’s nothing wrong with dreaming. My dream to be a head coach came true. I’ve seen the games in Eugene and Corvallis and it’s a crazy atmosphere. I know we will have great fan support and I know the fans would support and NFL team with that same enthusiasm.

JD: You’ve been busy on Facebook and twitter, chatting with many people. Will that trend continue once the season gets underway? How important is it to you to stay connected with your fan base?

MS: I hope to continue that dialog with fans. I think it helps fans see that the AFL is different than other leagues. We are here for the fans. We interact with the fans. Not only off the field but also on the field after games when we are out there on the turf signing autographs and taking pictures. This league would not be where it is today without the people that support it every day.

JD: Do you have a favorite team name from the contest?

MS: Grey Wolves, Grey, Express, and Prowlers. But the most important thing though for me is that the fans love the name. This is their team.