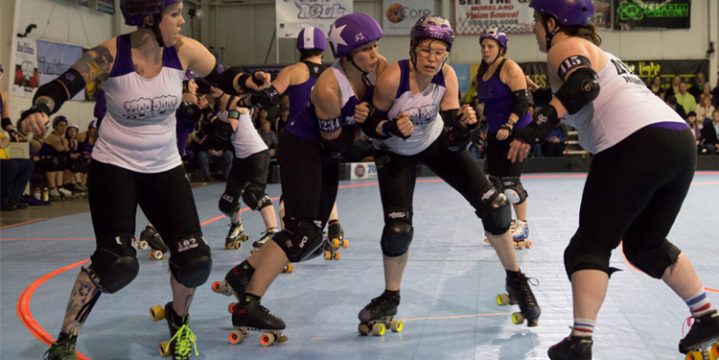 In Spring, roller derby action starts heating up with the Rose City Rollers. The home team season is in full swing, with about half of the season’s games played. Meanwhile, the all-star Wheels of Justice team representing Portland and the Rose City Rollers are starting to tune up for a season that culminates in WFTDA Playoffs in the fall.

Friday March 6: Wheels of Justice Exhibition Purple 140, White  168
Don’t miss Jake’s recap. This exhibition scrimmage was an opportunity for the public to get excited about the #2 ranked team in the world and the possibility of climbing even higher in 2015. Purple vs. White (or black vs. white) scrimmages happen all the time for travel team practice, and they’re all as much fun as this one is to watch, with teammates backing each other up, even as they try to knock each other down. Star jammers Much Mayhem and Scald Eagle didn’t disappoint their fans, but just as exciting is seeing familiar faces on this stage (Brawn Swanson, Bella Constrictor, Jenna Specht), and newer or transfer skaters like Double Dluxxx and Elizabeth Baumwirt. It’s going to be a fun season.

The Wheels of Justice’s next bout will be April 4th at the Hangar vs. the Rocky Mountain Roller Girls (Denver, CO) 5280 Fight Club.

Napoleon Blownapart scored over 100 points for the High Rollers, nearly equaling the output from the Heathers.

The next Rose City home game will be March 21, with the Guns ‘N’ Rollers trying for their first win of the season, but not if the Heathers have anything to say about it.