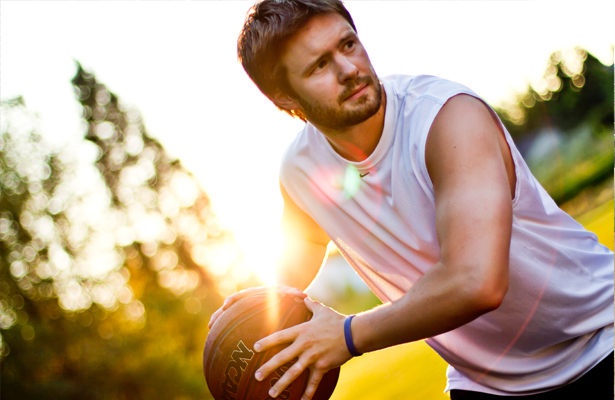 Think you’re a super fan? Guess again. Not too many people can say they’re named after the first player their favorite sports team acquired – or had season tickets to that team since before they were even born.

He was named after the Blazers’ first round draft pick in their very first draft: Geoffrey Michael Petrie. It’s no surprise, then, that Lamb will be naming his fist born Geoffrey. Seriously. Rom

That son is due to arrive this June.

Lamb is a Portland native for life. Aside from his collegiate years as a Duck – where he hit the math books maybe slightly as hard as the basketball court – he has no plans to ever leave the region.

“I will always live in Portland,” he says. “This is my home.”

When he’s not watching the Blazers (he attends literally every single home game), he’s playing basketball himself. A longtime member of Portland Basketball, as well as Hillsboro Basketball League, the guy lives and breathes James Naismith.

But don’t peg him an orange ball snob. He’s just as likely to be playing kickball with Underdog Sports or indoor soccer at Beaverton Soccer. When sports are off the table, he’s preparing his home in Beaverton for the anticipated arrival of Geoffrey II, with his wife, Noelle.

We bugged Lamb between games this weekend to ask a few more questions:

What are your thoughts on Portland as a recreational sports town?
Portland could use more leagues.

How could PDX improve as a sports town?
More teams, better teams.

How has playing sports influenced your life?
It distracts me from other parts of my life.

What is your greatest athletic memory?
Making the state tournament in high school and walking onto the court in memorial coliseum, remembering all the childhood memories I had there going to games with my dad.

Do you know anyone with a cool story or unique skill? We’d love to feature them on Portland Sports. Shoot us an email to let us know: jake@portlandsports.com.