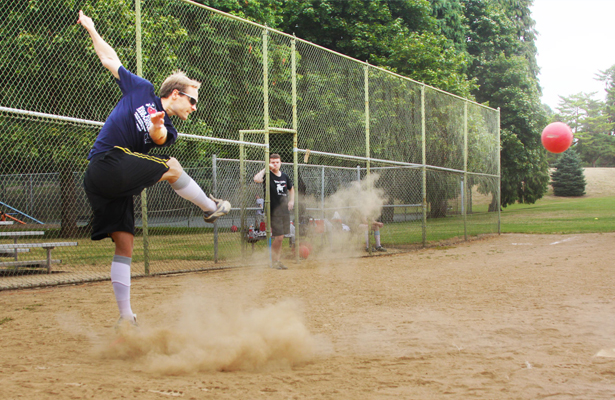 There’s no lining up on the playground waiting to get picked any more. Nowadays, there are organizations dedicated to bringing back your favorite schoolyard game. And this time, kids aren’t allowed to play.

Portland has seen an explosion in the amount of 21 and older kickball enthusiasts over the past decade. What began as a few small groups getting together has morphed into a citywide industry, of sorts. And there is a league for literally everyone.

Want a laid back, relaxing Sunday afternoon of mild exercise and mild competition? Portland has you covered.

How about a hardcore league more reminiscent of that crazy football scene in Starship Troopers? You know Stumptown has you covered.

With that being said, here is Portland Sports’ recommendation of the top places to get your red ball on:

The original Portland kickball club, Recesstime Sports traces their early beginnings to Northwest Kickball. Started in 2003 over a pitcher of beer, according to their website, social/sport enthusiasts longed for a player-run league celebrating the joy of kickball and have been booting and rallying ever since.

They’ve exploded from humble beginnings to a a juggernaut of kickball competition. They offer the following levels of play:

Last year they partnered with Nike + Fuelband to host a 12-team tournament on the home of the Portland Timbers: Jeld-Wen Field.

What started in Seattle as Underdog Sports, Portland soon offered a new playground full of players looking for a leisurely kickball league. Underdog came and their leagues exploded.

Some call Recesstime the kickball varsity team. If that’s the case, then Underdog is the JV team, Freshmen team and PE class.

As Underdog puts it:

A common misconception is that if you play with Underdog you must suck and be out of shape. Sure maybe sometimes – but Underdog is and always has been about the attitude our teams and players approach and interact with sports we offer.

Every league we offer has its own unique flavor, from gear to shirts to vocabulary and weeks in a season. But hopefully you find that no matter what the field, court, alley or course, that the Staff and Website of Underdog helps you truly enjoy your sport as a source of entertainment and fun (and sometimes even exercise) whether you win, lose, or don’t even care.

Relatively new to the Kickball scene in Portland, Comeback Sports also began north of the Willamette. They hail from both Seattle and Tacoma, where they saw massive support for both kickball and other sports.

Also like Underdog, Comeback Sports is all about fun. They encourage “ridiculous team outfits, cheering sections, and friendly rivalries.”

The bottom line is, this sport is all about FUN! There is no age limit for kickball, you only have to be 18 or older and 21+ for the post game experience. If you are worried about your skillz on the the diamond or you’re new to kickball, then sign up for our Rookie league. But when it comes down to it, It’s KICKBALL! Anyone can do it!

Damian Lillard Wins Rookie of the Month for April