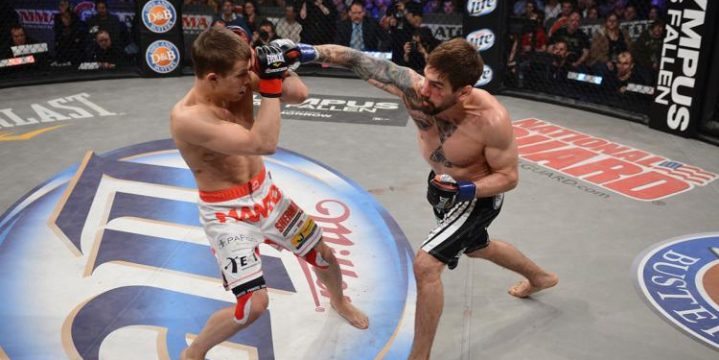 Dave “The Fugitive” Jansen has been waiting a long time for his chance to fight for the Bellator MMA lightweight title. After winning the season 7 lightweight tournament back in March of 2013, Jansen was set for a clash with then champion Michael Chandler. However, that fight would never take place. Chandler fell victim to injury, as did Jansen.  Two years later, fully recovered from a knee injury that had him sidelined eighteen months, Jansen is ready to return to the cage with the hopes of bringing gold back to Portland. Oregon has long been a hot bed for top-level talent in the world of mixed martial arts but championships have been relatively scarce as of late. The last person fighting out an Oregon based camp to hold a title with a major promotion was Evan Tanner back in 2005 when he was the UFC middleweight champion. This decade long drought is likely just feeding the fire that is Dave “The Fugitive” Jansen.

[quote align=’right’]“This is the opportunity of a lifetime and I’m really looking to make the most of it. I knew it was just a matter of time before I got the title shot…”[/quote]I recently had the opportunity to speak with Jansen and get his thoughts on the upcoming title shot against “Ill” Will Brooks at Bellator 136 on April 10. During our discussion, Jansen exuded a calm but confident attitude. Jansen seemed excited about the opportunity to fight Brooks he made it clear to me that he knew this day would come, it was inevitable.

I asked Jansen, considering the injury and the long wait for this title fight how does it feel to know that a shot at the belt is just 2 months away?

“This is the opportunity of a lifetime and I’m really looking to make the most of it. I knew it was just a matter of time before I got the title shot since I had already won a past tournament. But then they offered me the Rick Hawn fight as a bit of a test coming off my ACL injury to see what I had done since the surgery. I jumped on that opportunity to help speed things along.”

Being put in a comeback fight with a top contender like Rick Hawn (a former Olympian in judo) when you are widely considered next in line for a title shot wouldn’t be an easy thing to deal with for most people. Jansen however, took the challenge by the horn. He showcased his striking in the bout, earning a unanimous decision victory. Not known for his striking, Jansen’s standup looked much improved against Hawn. I asked Jansen what has changed in his camp that has helped create this newfound success on the feet?

“Since the injury I started training my kickboxing with Robert Villardi and he has changed everything for me as far as my confidence in both my hands and my kicking game [is concerned]. I feel more comfortable than I ever have before and I have so many more weapons on my feet as a result. My flexibility has gotten a lot better, Coach Villardi has me on a good stretching routine and it has been a huge help. I want to be able to take the fight anywhere it goes and every fight starts standing up. Early on in my career I was lacking in that part of my game but now things have really improved.”

Jansen has improved his game in more ways than just his striking. He mentioned to me that not only has his striking improved greatly but his jiu jitsu has also seen great improvement. Jansen credited this to the addition of the 10th Planet Jiu Jitsu program to the Rose City FC family. Head jiu jitsu instructor Nathan Orchard is a black belt under Eddie Bravo and Jansen had only positive things to say about Orchard and his team. Even with these improvements to his game, Jansen will likely have his hands full when he takes on Will Brooks in April. Brooks is a good wrestler with serious knock out power and excellent speed. I asked Jansen what about Will Brooks impressed him?[quote align=’right’]“He’s fast, that’s for sure, but I’m not really impressed with his power. I guess I’m just really impressed with his speed.”[/quote]

“He’s fast, that’s for sure, but I’m not really impressed with his power. I guess I’m just really impressed with his speed but he’s kind of a runner. He goes in and out, in and out. I’m not looking to chase him. I want to make him fight, that’s what I do, I force people to fight and I bully them. I’m really looking to dominate and everything I throw is going to be with bad intentions.”

With speed being the obvious concern, I asked Jansen what he was doing in camp to prepare for the speed of a guy like Brooks?

“The trick to beating Will Brooks is training with guys that are faster than Will Brooks and Carson [Frei] and Ian [Loveland] are definitely faster than he is. It won’t be a huge shock to my system when I get in there with Brooks because the guys I’m training with are so fast and talented.”

Jansen went on to praise his teammates in preparing him for this fight. He is proud of the guys around him and made it clear that he thinks the world of them. He specifically mentioned the young upstart, Carson Frei. Jansen praised the work ethic and determination of the young fighter from Idaho and believes that Frei has helped put him in position to defeat Will Brooks at Bellator 136.

Since suffering the ACL injury, Jansen has taken the time to get himself healthy and he is trying to stay on a path that will keep him healthy. Jansen mentioned multiple times that his health, both mentally and physically, are very important to him. He wants to be sure he can maintain a high level of performance in and out of the cage. Jansen mentioned specifically that he is working with a sports massage therapist, Bill Proppe, who he is very thankful for. That, in combination with an intense yoga program and two separate stretching programs, has been instrumental in keeping Jansen healthy.

From two years to now just two months the wait is nearly over for Dave “The Fugitive” Jansen. Between now and fight night you can find Jansen grinding away at the gym, holding a pose at a yoga class or stretching out with Coach Villardi. What you won’t find is Jansen taking time off. He is eager to show the world just what he brings to the table and whether it be a one round lopsided victory or a five round war, he will be ready to bring a title back to Oregon.

Written by David Golden of our partner site OregonSportsNews.com.