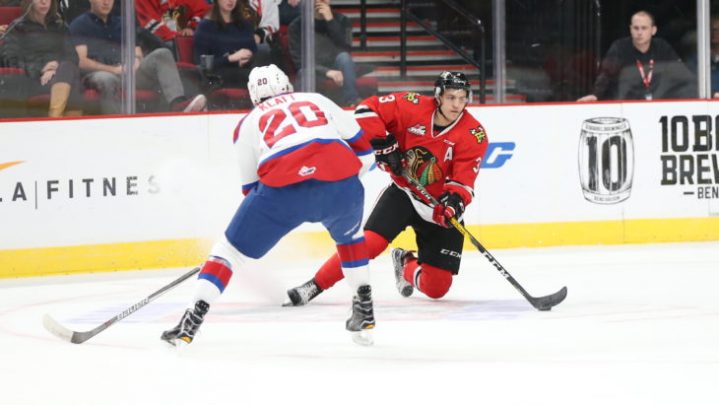 Heading into the Thanksgiving weekend, the Portland Winterhawks were facing strong competition with three games over five nights, two with BC Division teams and one with a Central Division team, all solidly ranked in their respective divisions.

After Portland’s drubbing of the Calgary Hitmen and subsequent overtime loss to the Lethbridge Hurricanes, the Hawks would battle the Edmonton Oil Kings from the Central Division, a team that they were familiar with during their heyday a few years back as the two teams tussled over the WHL Championship. These days, while both teams are still strong, they are in a bit of a rebuild phase and desperate for any points they can get. The Winterhawks would grab the lead when Cody Glass opened the scoring near the midway point of the first period. Portland would surrender the lead due to a pair of penalties, but regain it when Glass scored his second of the night. Late in the second period, Ryan Hughes would pad the Hawks lead and Keoni Texeira would add an insurance goal early in the third to put the game out of reach. Edmonton would score a late goal in the third, but would drop the 4-2 decision to the Winterhawks. Portland’s power play was unable to convert on any of its five power plays and stopped five of six Edmonton man advantage opportunities. Portland outshot the Oil Kings by a 40-24 margin.

Two days later it was the Daylight Classic game with the curtains open in the Veterans Memorial Coliseum, the Winterhawks would play host to the Victoria Royals. Portland started the game strong with an early goal by Lane Gilliss and held that lead through the midway mark of the first period when Victoria’s leading scorer Matthew Phillips got one past Winterhawks starter Cole Kehler. The Hawks would find themselves back on top late in the first when Skyler McKenzie scored his 14th of the season. An early penalty to start the second period by Victoria led to an early goal by Colton Veloso just a minute into the period to put the Hawks up by two. Regan Nagy scored for Victoria midway through the third period, but were not able to get any closer. With the Royal goaltender out for an extra attacker, Skyler McKenzie ended the night with an empty net goal to finish the game with a 4-2 score. Portland picked up a goal on seven power plays, while Victoria picked up one goal on six chances on the power play. Portland took the advantage in shots on goal 43-35.

With that momentum, Portland surged into the next game against the top rated team in the WHL and Canadian Hockey League in the Prince George Cougars. The Cougars had left Prince George on Wednesday to travel to Everett to face the Silvertips on Saturday evening and then to Portland for the Sunday matinee. The Cougars had lost to the Tips 3-0 and obviously were looking to get some points back on the board against the Winterhawks.

However, it was Portland that would open the scoring after a breakdown in the Cougars end and Joachim Blichfeld would make no mistake snapping the puck past Nick McBride. Then successive power plays for Prince George would end up resulting in their first goal as recently acquired Brendan Ghule would score on the tail end of a double minor penalty assessed to Keegan Iverson. The Cougars would heavily outshoot the Hawks 18-7 in that period. In the second, Henri Jokiharju would score an unassisted goal, followed by Cody Glass on a Hawks power play, midway through the second period. Just over three minutes later, Colby McAulbey would score for the Cougars and then add his second of the game midway through the third period to tie the game. Just over two minutes later, Brad Ginnell and Brendan De Jong would add goals for Portland to build up a 5-3 lead. The Cougars pulled Nick McBride with less than two minutes remaining in the period and another flurry in the Hawks zone was weathered by Portland who twice attempted a shot on the empty net from within their zone. The first resulted in an icing call, while the second tucked itself inside the left post of the Cougar net as Keoni Texeira notched his seventh of the year to put the win in the Winterhawks column with the final a 6-3 decision.  Portland was outshot 42 to 33 in the contest. Portland went 1 for 3 on the power play and held Prince George to just one goal on five chances.

With the wins, Portland stays well in the hunt in the US Division keeping pace with Spokane Chiefs and Seattle Thunderbirds and seven points out of second place. In its last six games, Portland has won 5 and lost 1 in overtime after losing the four previous games in the last ten. Now that over a third of the season has passed, the tightness in the divisions has started to really emerge and no team can consider any game an easy night.

Portland will face that in the upcoming week as they head to Spokane on Wednesday for their first road game since early November. Sleep will be tough for the Hawks as they play the night game on Friday in Kennewick, WA  and travel home to Portland immediately following, with a game just under 12 hours later against the Kootenay Ice. The Hawks will end the three games in three days with another afternoon game against the Medicine Hat Tigers. Should the Hawks perform well in these games and capture the majority of the points, the Hawks would look by most teams, to being in strong playoff contention for this season.

Saturday’s game against the Kootenay Ice will be a 2pm start at Veterans Memorial Coliseum with fans asked to bring a new, unwrapped toy for the Fox 12 Oregon Toy Drive while Sunday’s game is a special Fred Meyer Family Night with discount vouchers available through Fred Meyer stores. Just over a week later, the Hawks will host their annual Teddy Bear Toss where fans are encouraged to bring bears and other stuffed plush to the game to toss on the ice when the Winterhawks score their first goal.