How did the Portland Winterhawks Reach 10 in a Row? 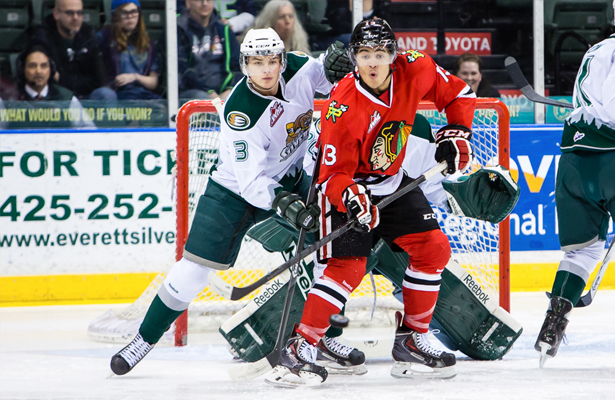 Prior to the start of this week’s games, half of the Portland Winterhawks roster came to Lake Oswego, Oregon and went bowling with the fans.

While the averages on strikes weren’t so high, the players could probably blame that on the swarms of fans and autograph seekers. It was a busy time for other appearances in the week, which also included the team visiting all Portland area Toyota dealerships as part of Family Hockey Day.

This was the week of the “four point games,” ones that would be against divisional rivals and would be some of their toughest challenges. Someone should have told the opposition. The Hawks took charge in three games in four nights and made a great deal of space between them and the second place US Division team.

Due to a very quirky schedule, it started with their third game against the Everett Silvertips in five days. Like the earlier walkthrough games by Portland, this was no exception. The Hawks thrashed the Tips 8-1 on a four point night by Paul Bittner. With two goals and two assists, he helped drive an offense that was firing on all cylinders. Corbin Boes earned the victory in the net for Portland two nights later, a road weary Spokane Chiefs came to Portland and gave Brendan Burke his second shutout of the season with a 6-0 mauling. Oliver Bjorkstrand led the way with two goals and Bittner added another in the contest which saw the Winterhawks go three for six on the power play and deny Spokane much of anything on their power play opportunities. Spokane has yet to win a game against the Winterhawks these season and with just one more with the two teams, in Spokane, it will be the only chance at redemption for the Chiefs.

The next night, it was a solid Seattle Thunderbirds team that came to town at the Veterans Memorial Coliseum and gave the Hawks eight power play chances. The Hawks scored on two of them and added a shorthanded goal to beat the Thunderbirds 3-0. Back-to-back wins and shutouts for Burke as the stingy defense allowed just 16 shots. The wins put the Hawks eight points ahead of second place Seattle in the US Division with 19 games remaining in the regular season.

The wins and zero goals against by Burke this week could be enough to earn him nomination for WHL Goaltender of the Week, and he has really stepped up his game since the arrival of Corbin Boes. This goaltending tandem will be ready for the playoffs.

The Hawks are currently on a 10-game winning streak, having outscored the opposition 51-13; they will be greatly tested as they hit the road for the next seven of eleven games including a four game trip to Canada with stops in Prince George for two games, then onto Kamloops and Vancouver.

One solace for the team is that all of the teams they are facing this month have struggled against the Winterhawks this season. This could be a bad thing for the team as these teams are scrounging for any points they can get to make a playoff spot and also play the spoiler role for the top rated teams heading towards post-season.

The point scoring race has also tightened up as well, with Spokane’s Mich Holmberg being heavily chased by two Winterhawks players. Oliver Bjorkstrand and Nic Petan are within the grasp of the lead, but have played several fewer games due to their participation in World Juniors and other tournaments.

Ice Chips: The Booster Club will be accepting applications for membership renewals and new sign-ups starting February 8. This past season, nearly 600 people joined the Booster Club which raises funds for a variety of local charities including the Continuing Education Fund. Visit the Booster Club website for more information. The Booster Club is also running a fan trip to Kent, WA on March 1st to see the Winterhawks square off against the Seattle Thunderbirds. There is very limited space aboard the coach. Fans can sign up at the next home game.

Stuart Kemp is the President of the Portland Winterhawks Booster Club, a 501(c)(3) registered charity | Courtesy of Oregon Sports News

What is Wrong with the Blazers?