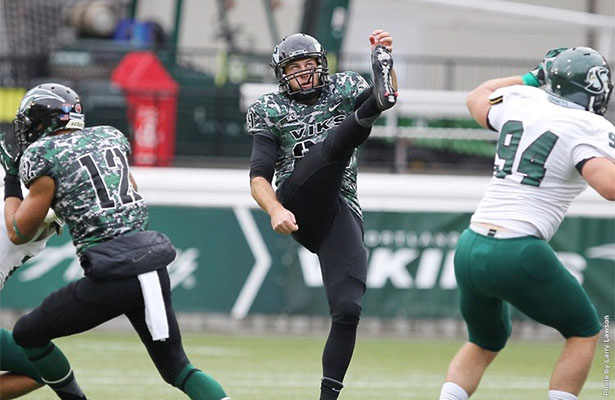 Loomis is one of 11 top student-athletes recognized by the FCS ADA as players of the year.

With his honor, Loomis may be the biggest surprise on any football All-America this season. The surprise of the story is that, prior to this season, Loomis had not played football for seven years.

Loomis, a 6-2, 210-pounder from Roseburg, OR, burst onto the scene this season with a PSU school-record and national-leading 46.5 punting average. His performance came after spending nearly seven years away from college football, including a nearly four-year stint in the Army. Loomis broke the previous PSU school record by almost four yards (42.8). In addition, PSU led the nation in net punting with a 41.7 yard average.

While Portland State plays in the Big Sky Conference, a league that has several schools at elevation, Loomis punted in nine of 12 games at or near sea-level, making his average all the more impressive. Loomis had 18 punts over 50 yards on the season. There were two punts of 67 yards and one of 66 yards. Out of 56 punts, he placed 18 inside the 20-yard line and 17 were fair caught. Loomis also served is the main kickoff man for the Vikings with 37 kicks for a 57.8 average and nine touchbacks.

Following the season, Loomis was named first team All-Big Sky Conference and Portland State’s Special Teams Player of the Year. He has already been named first team All-America by media outlets College Sports Madness and the Beyond Sports Network. He is certain to be selected to more All-America teams this week as major media outlets release honors.

“It’s pretty humbling from the standpoint that I haven’t played football in seven years,” said Loomis of his post-season awards. “It has a lot to do with your whole punt team in general. It wasn’t just me. In my opinion (long-snapper) Kameron Canaday is the best snapper in the country, and we have a great cover team. It has been basically a whole team effort to win something like this.”

Loomis last played football at Oregon State in 2006. But he is actually more of a transfer from the US Army, where he spent three years and eight months in the 2-325 Airborne Infantry Regiment – 82nd Airborne Division in Fort Bragg, NC.

Loomis was the starting punter at OSU as a true freshman in 2006, averaging 41.3 yards. But, he decided to leave school and eventually went into the Army for a near-four-year tour. He was honorably discharged in 2011.

After returning to his hometown of Roseburg, Loomis started helping out the local high school team’s punter. At that time, Loomis realized he could still punt. So, while he was already considering enrolling at Portland State to get a degree, he called Coach Nigel Burton last winter and offered his punting services. Burton agreed and Loomis joined for spring football, easily earning a starting role. Loomis turned 26 on Sept. 30 and is the oldest Viking on the team.

“(Joining the football team) started out just to see if I can do it,” said Loomis. “It was not to see if I could start or even play right way. Once it came back to me and I knew I could start, I just wanted to be consistent. As the season went on, it was just a matter of trying to maintain that success and try to get better each week.”