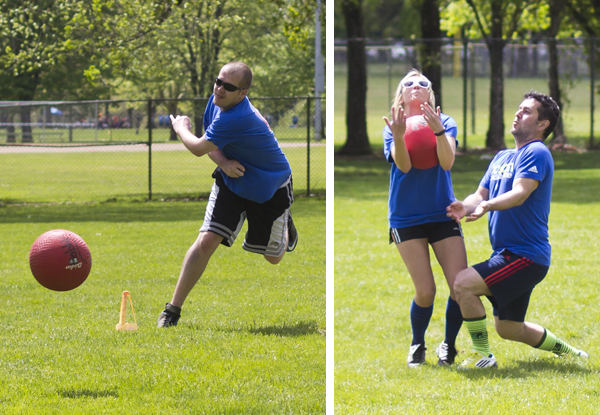 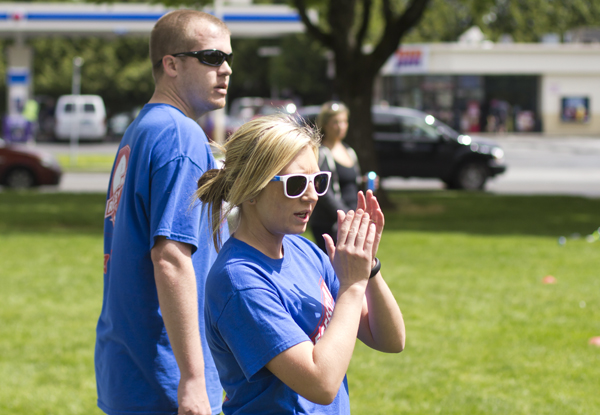 On a sunny Cinco de Mayo at Portland’s Unthank Park, an Underdog kickball match of epic proportions looks to head into extra innings.

With two outs in the bottom of the last inning, John Miller represents the game-winning run just 60 feet away. The score is 9-9 and the final batter steps to the plate.

Standing a hair taller than your average middle schooler, John’s wife isn’t exactly a threat with the long ball. A bunt doesn’t do much with two outs, but nobody tells that to Alexandria Miller. The final pitch comes rolling through the grass and Alex does what she does best: bunts a short ball down the third baseline and runs like hell.

The pitcher grips the rubber ball and fires to first base. As long as Alex gets thrown out the runner can’t score from third, propelling both teams into extra innings.

But the throw is late.

“Dirty Birds” just beat “Weapons of Mass Consumption” and Underdog Sports dubs the husband and wife players of the game. “Miller Time,” they later post on the website.

But the celebration is short lived as the Millers aren’t quite done. This was just one of three kickball games they’ll play today – a slow day, for them, because next weekend they’ll play five games in two days.

[dropcap]J[/dropcap]ohn and Alexandria (Alex) Miller first met four years ago through work. Engaged after less than a year and married shortly after in hopes of beginning a family, Alex gave birth to their first son last spring. With John’s daughter from a previous marriage, the family is growing as they hope to add another child soon.

But since the early days of their relationship, another love has already been cultivated. One with a red, bouncy ball.

“Alex actually made the decision for us to start playing kickball,” says John. “I was hesitant at first. Who would think a childhood game could be so fun as an adult? But now I can’t imagine our life without kickball.”

Since that first coed team in the fall of 2010, the couple hasn’t stopped playing. They’ve been part of Portland’s three largest kickball organizations – Recesstime, Underdog and Oregon Kickball Club – as well as more than 25 individual teams. In just their second season at Underdog, they were part of an undefeated championship-winning team: Red Ball ‘N Vodka. But that was at the lower level, and when the team disbanded after that championship run, the Millers found another squad.

“The team names are one of my favorite things,” says Alex. “Some of the best are Red Ball ‘N Vodka, Blue Balls, Mother’s Milk and my all-time favorite is a team I captained myself: Ball Me, Maybe.”

The couple has played in countless tournaments, multiple leagues and even different teams at the same time. “After playing one season with two different teams,” says Alex, “we found that only one game of kickball on Sunday just doesn’t satisfy the addiction we both share.”

But the game itself is not their only draw. As anyone who’s ever attended a Portland kickball game can attest, the leagues are often more about the people than the scoreboard.

“In most of leagues we play, you become a family,” says John. “Everyone knows each other and we all mostly get along. I think the kickball community is a tight knit group. It’s just as much a social gathering as it is a kickass time.”

With three distinct kickball leagues in Portland, the Millers have experienced all that the Rose City has to offer. They both look to Recesstime first when pointing out the positives: John loves their post-season structure while Alex appreciates the non-paid referees that allow more games to be played simultaneously.

“I love all the leagues for different reasons,” says Alex. “The rules are a little different and some leagues are just more competitive.”

What’s more, the Portland kickball community doesn’t just hide when the sun disappears each winter. John and Alex spend their Sundays in the rainy season playing on turf fields and often hanging out with teammates off the field.

They constantly recruit others to get out and play.

“Whether you are athletic or not, kickball is a fun game where you can meet some of the nicest, coolest, and most loyal people you will ever meet,” says John.

[dropcap]T[/dropcap]he Millers are currently on three separate teams, although John believes two should be the maximum. With the traveling involved on Sundays in Portland, not to mention their 1-year-old son, hopping from park to park for just a 50-minute game can become tedious.

They haven’t always played together, either. Alex stopped playing in the second trimester of her pregnancy last year before returning just two weeks after giving birth.

“Last summer,” she says, “myself and one of our best kickball friends both had new babies and breast milk was pumped in the cars on a regular basis. So people began betting on games and the loser had to drink that milk.”

Meanwhile, John loves that his son is getting outside at such a young age each weekend.

“All too often,” he says, “kids get consumed with gaming devices and social media that they forget the outside world. This lets him actually be a kid.”

Babysitters are the last of their worries. With many other parents on the same teams and the close friendships they’ve formed over the years, the sidelines are almost like a daycare. Both John and Alex consider some of their teammates the closest friends they have.

Most importantly, their relationship has remained strong throughout their kickballing careers. True, there have been a few arguments – like when John was giving directions on one team when Alex was actually the Captain – but their experience has been overly positive.

“Both of us enjoy playing sports and being outdoors,” he says. “Since all of these leagues are co-ed, this was the perfect opportunity for us to spend time together and do something we both enjoy.”

“Don’t get me wrong,” she says, “we have had our moments on the field where we rip each other’s heads off. But in the end we are best friends. And who doesn’t love spending time with their best friend?”

Managing Your Ankles: From Immediate Inury to Full Function