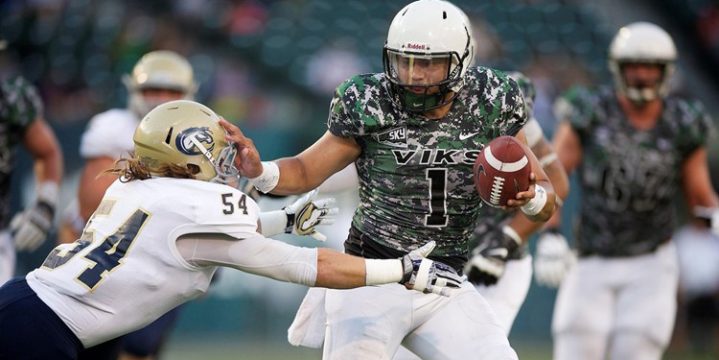 It all finally came together with offense, defense and special teams as Portland State defeated Weber State, 30-17, at Stewart Stadium.

“It was a solid win, a team win in the end,” said Viking Coach Nigel Burton.

The difference in the game for the Vikings after two close losses the last two weeks? “Takeaways, strictly the takeaways,” said Burton. “We ended drives (by Weber State). Fourth-down stops count as takeaways as well. And we protected the football ourselves. We didn’t lay it down in crucial situations and that was a win.”

The Vikings put a crooked number on the scoreboard first when wide receiver Darnell Adams caught a pass tipped by a Weber State defender in the back of the endzone. The 24-yard completion from Kieran McDonagh to Adams gave PSU a 7-0 lead at the 4:40 mark of the first quarter.

Kicker Jonathan Gonzales got the lead back for PSU with a 41-yard field goal early in the second quarter. Later in the period, cornerback Xavier Coleman picked off a Clark pass. Seven plays later Gonzales added a 45-yard field goal, and the Vikings led 13-7 at halftime.

A second Wildcat turnover to open the second half led to another Viking score. In the series, Kasey Closs carried twice on fly sweeps for 14 yards, then caught a 22-yard touchdown pass from McDonagh. Suddenly Portland State led 20-7 early in the third quarter.

Jonathan Gonzales extended the Viking lead to 23-10 with a short 18-yard field goal early in the fourth quarter. But Wildcat Billy Green, who came in in relief at quarterback, quickly engineered a seven-play, 75-yard drive, all through the air. His 36-yard touchdown pass to Darryl Denby closed the margin to 23-17.

Portland State had the clincher though, with an eight-play, 66-yard drive late in the contest. McDonagh’s eight-yard touchdown run with 2:25 to play iced the contest.

Steven Long led the ground game again, carrying 21 times for 118 yards. McDonagh added 62 yards and a score on 17 carries. He completed 14-23 passes for 172 yards, two touchdowns and no interceptions.

Jeremy Lutali led the defense with eight tackles, including one for loss. Aaron Sibley had seven stops. Darien Washingtonmade a fumble recovery and Chevy Walker added a key fourth-quarter interception.