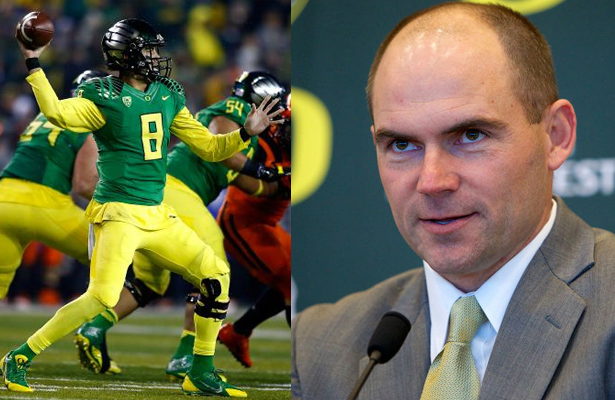 Marcus Mariota is coming back.

The last mock draft with the Hawaiian’s name it in had the quarterback going number two overall to the Jacksonville Jaguars. That’s what Mariota turned down to remain a college student, unpaid for his work on the football field that is making millions for others.

Surprised? I’m not. I don’t think many who have followed Mariota are either. When asked before the Civil War whether Mariota thought he would be playing his last game at Autzen, Marcus said, “No I don’t think so. And I’m being honest.”

When is Mariota not honest, forthright, and generally decent? People who attend school with him say he goes to class – that he eats, sleeps, plays football, and studies. This is in stark contrast to other athletic stars Oregon students have seen pass through the halls over the years.

Mariota is only a redshirt-sophomore this year. He needs to stay in school one more year to graduate, and he could use some more time in college football. Callously looking at things, it would appear Mariota made a dumb decision in returning to the Ducks.

After all, that college degree becomes less important with a $30 million dollar rookie contract. But Mariota sees the world passing by slowly. He has his feet planted firmly on the ground. He likes being in college. He likes being the Ducks quarterback. The NFL will be there next year. It will have to wait.

So with the quarterback is coming back. Marcus Mariota will be the face of college football in 2014 and with his return, the Ducks remain a real contender.

This is obviously good news for Mark Helfrich, who was quietly faced with an underwhelming crop of returning quarterbacks and uncertainty in nabbing a replacement on the recruiting trail.

And Helfrich was in need of some good news. He’s had a rough month.

It’s a harsh theory, but a plausible one: Oregon’s machine had been so finely tuned under Chip Kelly that the Ducks were running on autopilot until the Stanford game.

Then the Cardinal punched the high-flying Ducks in the face. It was a knockout. And Oregon never got up off the mat.

Being blown out at Arizona was as much confusing as it was angering. It was Ducks’ most lopsided loss since Mike Bellotti was head coach, and first conference loss by more than ten points in a half decade. You would say it was a total surrender, but Oregon never showed up to start the fight.

In fact, Kelly lost his first game twice at Oregon. In both years, he won the Pac-12 and made the Rose Bowl. That’s a machine.

Except after year one, we have little to no idea what Helfrich is all about. In the beginning, he was all about continuing Kelly’s offense and style, and he really hasn’t carved an identity of his own.

When the Ducks really needed someone to steady the ship after the Stanford game, Helfrich was nowhere to be found.

After an incredibly close call against Oregon State in a game that would have been one of the most embarrassing losses in Oregon history, Helfrich was prickly in his most notable post-game comment.

It was a scared and defensive argument almost too shallow to be worthy or rebutting. Of course, the SEC is much better than the Pac-12, which is often the result of SEC team’s battered record, and if Helfrich was trying to say the 2013 Beavers were vintage Giant Killers, he missed the mark on that one too.

Oregon State easily could have beaten the Ducks, at Autzen. They shot themselves in the foot in the red-zone and with turnovers.

Helfrich shouldn’t be fired, nor should his job be in jeopardy – which it isn’t. I just want to see something from him in the coming days. What does Helfrich think went wrong this year?

If it was injuries, especially to his returning quarterback, fine. If it was a failing defense that Helfrich didn’t have anything to do with, fine. If he was handicapped, fine. But we have no idea why the Ducks folded this year.

Coaches who don’t create identities of their own are given negative ones quickly. Mariota’s return delays the full transition away from the Kelly Era, and gives the Ducks another shot at the national title.

Helfrich has to deliver next year. If he doesn’t, no one will be content with wondering why.

Vikings and Pilots Clash for City Supremacy this Saturday