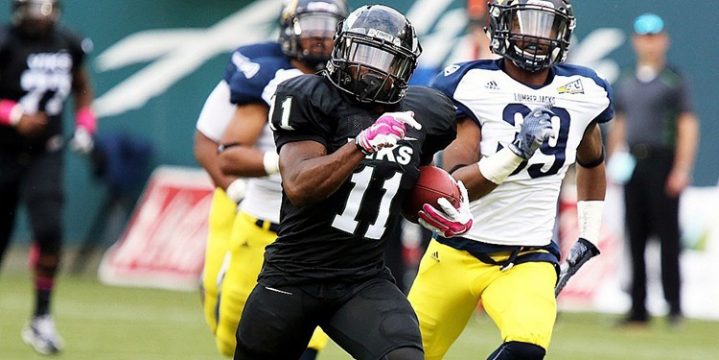 NAU quarterback Chase Cartwright’s three-yard run with 4:04 left on the clock gave the ‘Jacks the win and dropped the Vikings to 2-5 on the season, 1-2 in the Big Sky Conference. PSU is now 2-1 at home.

The defeat nullified a dynamic rushing performance by Steven Long. The redshirt freshman had four big runs, three of which went for more than 60 yards, and set up all three Viking scores. In the end, Long ran 16 times for 253 yards and one touchdown – the ninth-best rushing performance in PSU history.

Long broke open a defensive struggle early in the second quarter with an electric 66-yard dash, highlighting an 88-yard scoring drive. The Vikings converted a fourth-and-one play at the 13-yard line to extend the drive. Then Nate Tago finished off the drive with a five-yard scoring run.

Northern Arizona answered on its next series, driving 69 yards for a score. Cartwright completed an eight-yard screen pass to Casey Jahn for a tying touchdown.

The biggest play of the half came a moment later when NAU’s Marcus Alford picked off a Kieran McDonagh pass. Alford ripped the ball away from receiver Thomas Carter then found a lane down the right side of the field, returning the pick 67 yards for a touchdown. With that, NAU took a 14-7 halftime lead.

Long made his next big play early in the second half for the Vikings with a 62-yard scoring run. Trapped four yards behind the line, Long broke away from a would-be tackler, swiveled through the defense and was off to paydirt. That tied the game 14-14 at the 10:37 mark of the third quarter.

Following another defensive stand by the Vikings and a short NAU punt, PSU was set up at their own 47-yard line. Long burst through with another big play, a 24-yard run. Eventually the Vikings added a 31-yard field goal on that series, taking a 17-14 lead.

From there, both defenses took control. But, midway through the fourth quarter Northern Arizona put together an 11-play, 83-yard drive, aided by two Viking penalties. Cartwright capped the series with a three-yard touchdown run at the 4:04 mark.

PSU’s ensuing series was a three-and-out and the Vikings had to punt it away with just over three minutes left in the game. The Lumberjacks got the first down they needed and the Vikings never got the ball back.

The Vikings were effective offensively, averaging eight yards per play, but ran only 50 plays in the game as they converted just 2-12 third downs. PSU also went for a fourth-and-goal play at the one-yard line with just over 12 minutes to play and a 17-14 lead, but were stopped by the Lumberjacks defense.

NAU was able to control possession, running 80 plays and holding the football for 36:07 of the game.

Cartwright was 17-35 passing for 222 yards and one score. Jahn led the NAU running game with 20 carries for 78 yards.

Long had 297 of the Vikings’ 402 total yards as he also made three receptions for 44 yards.

“I just saw the holes today. The offensive line did a great job up front… but we didn’t get the win, we didn’t get what we wanted,” said Long.

Aaron Sibley led the Viking defense with 11 tackles. Michael Doman had nine stops and forced a fumble. Sadat Sulleymanwas in on two sacks.

Afterward, Head Coach Nigel Burton summed up the difference in this game, and other Viking losses: “Turnovers. And it’s not like our offense is giving away the ball a lot. Their guy made a play and turned it into points. We’ve got to get more turnovers on defense and create more opportunities for our offense. That’s the unfortunate part as our guys played well enough to win again.”

GAME NOTES – PSU had one turnover in the game. NAU had none. PSU has not forced a turnover in the last four games…Jonathan Gonzales attempted a 56-yard field goal in the first quarter. It would have been a school record but flew just wide right… NAU has beaten the Vikings in five of their last six meetings… the Lumberjacks are 4-3, 2-1 in the Big Sky Conference… Portland State travels to Weber State for a Big Sky Conference game next Saturday. Kickoff is at noon PT. The game will air on Rip City Radio 620 AM and www.ripcityradio.com.