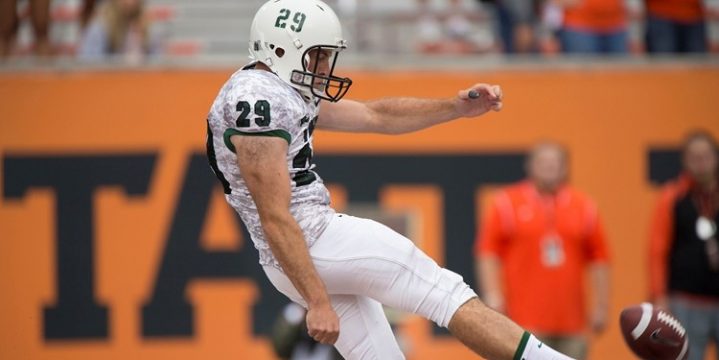 After gathering information and reviewing the credentials for the “record” nominations for this year’s Armed Forces Merit Award presented by the Football Writers Association of America, the selection committee reviewed 15 “candidates” for the 2014 honor to be announced this Veteran’s Day, November 11.

“We are very pleased with the list of nominations for the 2014 Armed Forces Merit Award presented by the FWAA,” said Brant Ringler, the executive director of the Lockheed Martin Armed Forces Bowl. “The 2014 nominees feature active college players, administrations, coaches, officials and programs that are currently involved with college football. Our goal is to recognize these individuals for their valuable service to our country before their current involvement with the sport. Our first two recipients were outstanding individuals that served in the military before returning to school to earn their degrees while making an impact on their football teams.”

Nate Boyer, a long snapper for the University of Texas, was the first recipient in 2012 of the Armed Forces Merit Award presented by the FWAA. A graduate student this season after serving actively in the U. S. Armed (2004-2009), Boyer is still competing for the Longhorns and was named to the 2014 Allstate AFCA Good Works Team and as a semifinalist for the 2014 William V. Campbell Trophy, which recognizes the best football scholar-athlete in the nation, in September.

Brandon McCoy, a defensive lineman at the University of North Texas, was 2013 Armed Forces Merit Award recipient. After serving in the U. S. Army (2004-2009), McCoy played 44 games for the Mean Green during a four-season career as he helped guide the school to a win in the 2014 Heart of Dallas Bowl over UNLV.