Inside The Nike Hoop Summit: Hoop Summit Alum Terrance Ferguson Is On The Rise “Down Under” 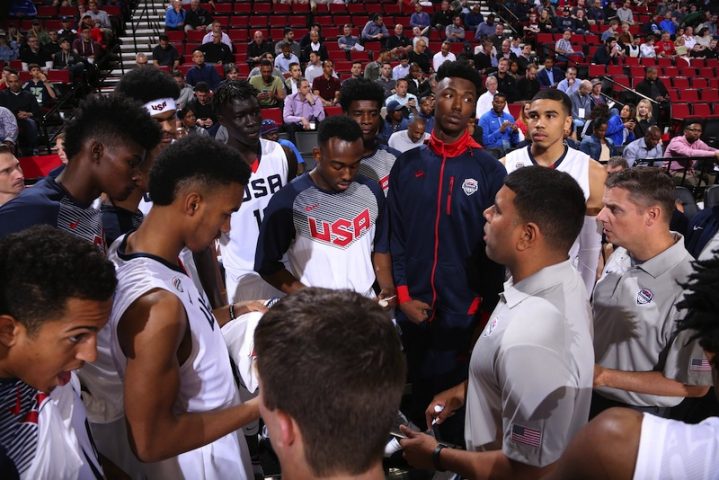 The fanfare for Terrance Ferguson isn’t quite what it could have been.

The star of the 2016 Nike Hoop Summit was all set to take over a leadership role at the University of Arizona, but life has a way to surprise us sometimes and now Ferguson is playing professionally in Australia. Rewind a few months and Hoop Summit fans will remember the Tulsa, Oklahoma native stealing the show at the Moda Center last April by draining six three-pointers in a four-minute span en route to a team-high 21 points in the USA’s 101-67 blowout of the World Select team.

His seven three-pointers set a new Hoop Summit record and is the perfect flashback to start looking ahead to this April with the 2017 Nike Hoop Summit.

During his time in Portland for the Summit, Ferguson talked to officials from the Australia club Adelaide 36ers ready to offer him a chance to play professionally. Lined up was also an additional deal with Under Armour.  And instead of joining his USA teammates in heading off to college this fall, Ferguson boarded a plane destined for southern Australia to play for the 36ers.

There was a bit of attention in Adelaide for Ferguson, knowing that the club would be bringing in a two-time youth world champ as Ferguson helped the United States to the 2014 FIBA U17 World Championship and 2015 FIBA U19 World Championship titles.

Ten games into his Australian National Basketball League career, the 18-year-old Ferguson is averaging 6.2 points and 1.3 rebounds in nearly 18 minutes a game. He has scored in double digits three times, including his first game. Ferguson’s time “down under” has seen its highs and lows. There was the two-game suspension in late October for allegedly punching an opponent. And then came November 19 against the Brisbane Bullets. Ferguson had by far his worst game as a professional, failing to take a shot and not collecting a single rebound, assist or steal in 20 minutes of a blowout loss.  But five days later – on Thanksgiving – Ferguson bounced back in grand fashion showing the world why he’s considered a top-20 pick in the 2017 NBA Draft.

He was inserted into Adelaide’s starting line-up for the first time and scored 10 points to go with two rebounds, three assists and one steal in a blowout win over Brisbane. He also set social media ablaze with a big time dunk in the fourth quarter that showcased his fantastic athleticism.

While the move was questioned by some, it’s been a major benefit for Ferguson.

Instead of playing for the Arizona Wildcats in the Pac-12 and facing college players, Ferguson is taking on professional players, including former NBA players like Josh Powell, Cameron Bairstow and David Andersen. There are also players from colleges as strong as Georgetown, NC State, Florida, Iowa State, Gonzaga, Wisconsin, Michigan and Illinois. And the Australian NBL includes half of Australia’s 12-man roster from the 2016 Olympics, where the Aussies took fourth place, losing to Spain by one point in the bronze medal game. Ferguson’s teammates include former California-Berkeley star Jerome Randle as well as Anthony Drmic from Boise State, Nathan Sobey of Wyoming, Matt Hodgson who went to St. Mary’s, Eric Jacobsen formerly of Arizona State and Majok Deng of Louisiana Monroe.

And Ferguson is coached by Illinois native Joey Wright, who played basketball at Drake and Texas and was drafted by the Phoenix Suns in the second round of the 1991 draft but never played in the NBA. He played five seasons abroad before becoming a coach and has been in Australia since 2002. Ferguson has told media that going the professional route overseas was “the best decision I ever made”. He is learning the tricks of the trade from professionals who have gone through it in the NBA and top leagues around the world.

Sure, the fanfare from crowds in Tucson might not be there. But many could argue Ferguson is getting a better basketball education as a pro, rooted heavily in showcasing his game at the annual Nike Hoop Summit.