September 3, 2014 by Preston Toulon No Comments 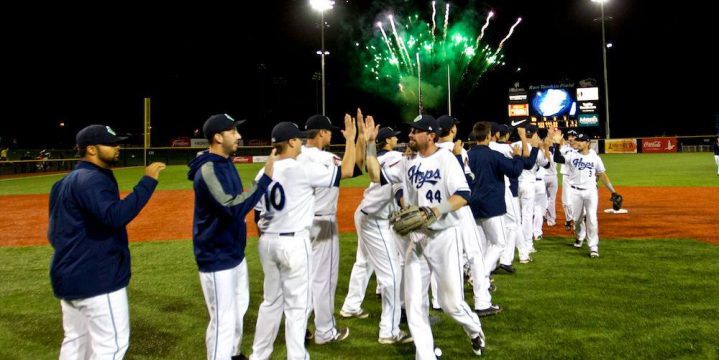 The Hops can’t stop making history. In the first postseason home game at Ron Tonkin Field, Hillsboro completed a sweep of the Boise Hawks by the score of 5-2.

They will advance to play for the Northwest League Championship against the winner of the series between the Spokane Indians and Vancouver Canadians. Vancouver currently holds a 1-0 series lead over Spokane.

Hillsboro jumped out to an early lead in the bottom of the first after Taylor Ratliff led off with a double for the second consecutive game. Kevin Cron followed with a ground-rule double to right center field to open the scoring.

Hops’ starter Markus Solbach immediately gave the lead back, but would redeem himself. In the top of the second, Jesse Hodges hit a one-out single, and Justin Marra brought him home with a throttled home run to right field. The Hops found themselves down 2-1, the same score they rallied from the night prior.

Hillsboro responded with runs in the fourth, fifth, and sixth innings. Stryker Trahan doubled to lead off the fourth, and moved to third on a Jordan Parr sacrifice bunt. Stewart Ijames plated Trahan with a single to tie the game at two.

The bottom of the fifth inning was highlighted by a Hops’ two-out rally to take back the lead. Steve Nyisztor doubled to right, and came around to score on a Kevin Cron RBI single that sent the raucous, rally-towel-waving crowd into a fervor. It gave the Hops a 3-2 lead that they would not relinquish.

The finishing blow was delivered by Hillsboro in the bottom of the sixth. Parr had a one-out single and stole second base. Pedro Ruiz drove in Parr with a single, and advanced to second when Boise tried to nab Parr at the plate. Nate Robertson then belted a triple to the left-field warning track to bring home Ruiz to put the game out of reach at 5-2.

Mason McCullough threw the eighth for the inning and was shaky in his command, recording two walks. The right-hander bent but didn’t break, and ultimately tallied a scoreless inning.

Game two was eerily similar to game one as the Hops rallied from a 2-1 deficit yet again, and closer Zac Curtis entered with a 5-2 lead yet again. Boise, season on the line, did their part to make it interesting, and brought the tying run to the plate in the form of 17-year-old dynamo Gleyber Torres. The battle between Curtis and Torres was epic, but Curtis got him swinging.

The Hillsboro Hops are playing for the Northwest League Championship.

The Hops await the winner of the Spokane-Vancouver series. If Vancouver wins the series, game one will be on the road Saturday night. If Spokane wins, all three games will be in Hillsboro due to a scheduling conflict at Scotiabank Field in Spokane. In either scenario, the Hops will host a game at Ron Tonkin Field Sunday, September 6. First pitch will be at 5:03 PM. Radio pregame show begins at 4:30 PM on Rip City Radio 620 AM and at www.foxsportsradio620.com.