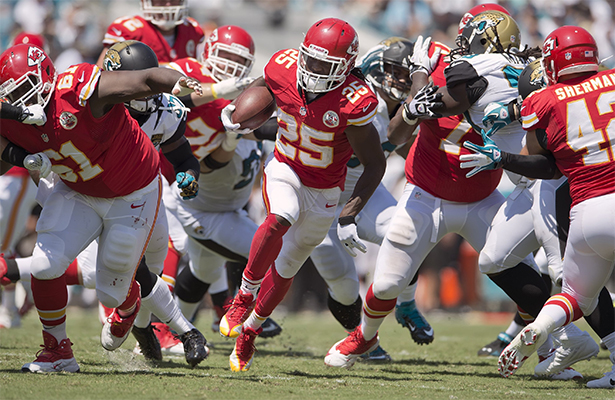 The First place team in the AFC West at the mid-point of the season is…..the Kansas City Chiefs.

That’s right, the Chiefs, not the Broncos, are on top of the division with an impressive 8-0 record. Third place belongs to the Chargers, while the hapless Raiders are once again playing for a top five draft pick.

The Chiefs have compiled an undefeated record thus far behind a dominating defense, a pedestrian offense and a somewhat easy schedule. Although their competition hasn’t been stellar, they have been winning games with defense, which doesn’t really help us fantasy players out much. Jamaal Charles has been a stud running back once again, but Dwayne Bowe has been invisible all year. This is due mostly to the conservative play of QB Alex Smith and new head coach Andy Reid’s reluctance to throw any passes downfield. The Chiefs are a perfect example of the difference between real life football and fantasy. Not much offensive production out of this team even though they are 8-0.

Conversely, the second place Broncos have been torching defenses on their way to a 7-1 mark. Obviously Peyton Manning and his crop of receivers have been nothing short of dominant, however, there are a couple of surprises thus far. TE Julius Thomas is fourth in fantasy scoring among tight ends and RB Knowshon Moreno has emerged as the clear cut number one back in Denver and is scoring a lot of fantasy points despite the pass happy offense. Try to acquire as many Broncos as you can going forward because I see no reason why this offense can’t keep lighting it up.

The third place Chargers have been up and down this year but the story of this year’s San Diego “Super” Chargers has been the unexpected resurgence of QB Philip Rivers. Rivers is the eighth highest scoring fantasy QB despite having virtually no one to pass to. Antonio Gates has been solid at tight end and RB Ryan Mathews has stayed relatively healthy while compiling above average stats. Rookie WR Keenan Allen has emerged as Rivers’ favorite target, so I would target him as a potential trade acquisition from this point on.

Finally, Oakland has beaten some bad teams on their way to a 3-4 mark. Even though the Raiders are not that great on offense, they do have a few fantasy options if you are digging for hidden gems. RB Darren McFadden has produced somewhat and first year starter at QB, Terrell Pryor seems to find a way to score fantasy points despite being a below average passer. Denarius Moore has been inconsistent at wide receiver making it difficult to guess which games you can safely play him in. Lastly, spot starting Oakland’s defense may not be as outlandish as one might have assumed going into 2013. They have totally revamped one of the worst defensive units from last year. Depending on who they are playing, the Oakland defense could be worth a look.

I have to believe that the Chiefs will lose a few more games on their way to a wild card berth while Denver overtakes them to take the number one seed in the AFC. San Diego will be happy finishing 8-8 while Oakland fans can look forward to another wasted year playing for high draft position.

After Monday night’s near disaster in ST. Louis, Seattle sits atop the NFC West at 6-1, while the 49’ers have quietly climbed back into contention with a 6-2 record. Third place belongs to the Cardinals after they defeated the Falcons on Sunday to improve to 4-3. Unfortunately for Rams fans, they could not pull off the upset against the Seahawks and fall to 3-4.

This division has gone pretty much as expected. Russell Wilson, Marshawn Lynch, Colin Kaepernick, Vernon Davis, Frank Gore, and the Defenses have been quality fantasy producers all year long. As far as the other two teams are concerned, no stars have stepped up so it’s all about uncovering some buried fantasy gold.

I would first look to somehow acquire Andre Ellington. This is the back Arizona has been looking for since forever and as long as he stays healthy and QB Carson Palmer can complete more passes to his wideouts than to opposing defensive backs, this guy could be worth rostering and spot starting whenever your starter gets banged up or has a tough match up. WR Larry Fitzgerald has been disappointing so far, but if the previous scenario plays out, then expect Fitz to bust out of the fantasy doldrums.

As for the Rams, the offense still seems to be at least a year away from being fantasy relevant. Only Rookie RB Zac Stacy can now be considered as a deep sleeper for you desperate owners, based on his performance against the stingy Seattle defense. None of the Rams pass catchers can be trusted now that perennial back up Kellen Clemens is guiding the offense.

This division will once again be decided between San Francisco and Seattle. I’m gonna give Seattle the edge here mostly based on their home field advantage. It is significant. The 49’ers should be able to lock up a wild card berth because the other divisions in the NFC just don’t stack up to the NFC West. Arizona will scratch and claw their way to 8-8 while the Rams will struggle to win one more game to finish the year at 4-12.

Tomorrow I will break down the AFC and NFC North divisions. Remember to Keep On Scramblin’ and hit me up on Twitter @MaahsScrambler with any fantasy questions and line up advice.