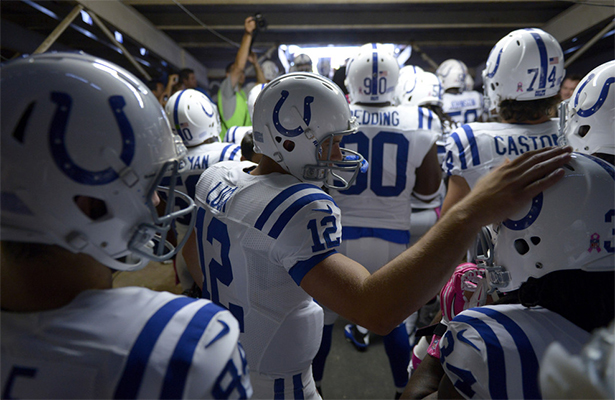 The AFC South division has been somewhat of a surprise so far.

The Colts, at 5-2, sit on top of the division after some impressive wins against Seattle, San Francisco, and Denver. Tennessee is 2nd with a 3-4 record, followed by Houston at 2-5. Lastly, the Jags come limping into the halfway point without a win.

Everyone knew the Colts were going to be good this year, but I did not see them beating all of those top teams and being three games ahead of the Texans at this point in the season. QB Andrew Luck is just about an automatic start every week, while newly acquired RB Trent Richardson continues to struggle finding running lanes with his new squad. I say be patient as the Colts’ running game is bound to improve with the third overall pick of last year’s draft toting the rock. WR’s Reggie Wayne and T.Y. Hilton are both solid #2 wideouts. Wayne is more of a possession guy while Hilton is the big play threat. TE Coby Fleener has emerged as an above average tight end in fantasy and the defense can score depending upon the match up. Not much in the way of sleepers offered by this club. WR Darrius Heyward-Bey could be rostered in deeper leagues while back up RB Donald Brown should be considered as a good handcuff to Trent Richardson owners.

In 2nd place we find the Titans, not the Texans. So far, the Titans have not been huge in fantasy while compiling a 3-4 record. This is due to QB Jake Locker’s inconsistency and hip injury. He returned to action two weeks ago and had a nice game against the 49’ers. He can be considered as a quality backup going forward. RB Chris Johnson has been up and down, so good luck in guessing which games he will show up in. WR Kendall Wright has been solid while Nate Washington could be considered as a spot starter depending on match ups. Former number one WR Kenny Britt is done and should be dropped by all. TE Delanie Walker is a sleeper at the tight end position; keep him on your bench ready to come in if your starter goes down with an injury.

The Texans have been baffling fantasy owners thus far, due in part to QB Matt Schaub’s terrible play, and by RB Arian Foster’s uncharacteristic inconsistency. WR Andre Johnson is still a beast, especially in PPR formats, while rookie wideout Deandre Hopkins is a solid flex play. TE Garrett Graham has taken over for the injured Owen Daniels, but I would wait to see how new starter at QB, Case Keenum, uses him before putting him in your starting lineup. The defense has been less than stellar this year as well as back up RB Ben Tate. There are no sleepers other than the afore mentioned QB Keenum to consider from this disappointing team.

Finally, the Jags have done nothing to light up fantasy scoreboards, aside from the occasional good game from WR Justin Blackmon. RB Maurice Jones-Drew seems to be finding a little running room as of late, but is not producing at nearly the pace I thought he would coming in to his contract year. The QB situation is terrible, stay away. TE Marcedes Lewis has been a non-factor once again this season. WR Cecil Shorts is a flex play at best, while the third wideout, Ace Sanders is the only sleeper on this roster worth mentioning.

The Colts seem to have all of the pieces in place to win this division and make a deep run in the postseason. The Titans and the Texans will finish tied for second at 8-8, but will be at home watching the playoffs on T.V. with the rest of us. Jacksonville seems poised to run the table in the wrong way earning next year’s top pick in the draft.

I don’t think anyone predicted the Falcons to be 2-5 and in third place behind the Panthers and Saints in the NFC South. New Orleans has also been somewhat surprising at 6-1 considering how bad they were last year. The Panthers seem to have figured out that defense and a solid rush game is the best recipe for them as they have started the year 4-3. Meanwhile, Tampa Bay is a mess and should provide Jacksonville a good challenge for the number one pick next year.

The Saints’ Drew Brees has been lights out, even better than I thought he would be. Having HC Sean Payton back has definitely helped the offense out. Likewise, TE Jimmy Graham has been dominant, even while battling injury. WR Marques Colston, on the other hand, has been terrible. Rookie WR Kenny Stills has emerged as the clear cut number one at wideout. The running back position is still an enigma, although Pierre Thomas has emerged as the back to own from this roster. The defense is much improved over last year and could be considered as a spot start depending on who they are playing. The way Drew Brees is spreading the ball around, there are no obvious sleepers on this team as of yet.

Carolina is in second place behind the strong play of QB Cam Newton. He is an automatic must start going forward. WR Steve Smith has been average this season. TE Greg Olsen, on the other hand, has been an above average fantasy tight end. He is 12th in fantasy scoring at that position so far. RB DeAngelo Williams has been solid, although he is due to start splitting carries once again now that fellow RB Jonathan Stewart is slated to return very soon. The Panther’s defense is tied with San Francisco at 4th in fantasy scoring. WR Brandon LaFell and touchdown vulture RB Mike Tolbert are the two sleepers to consider adding from this team as we progress through the 2013 season.

Atlanta’s RB Steven Jackson has shown his age, stud WR Julio Jones is out for the year, WR Roddy White has missed two straight games with an ankle injury, and TE Tony Gonzales has not produced the kind of numbers that we are used to. QB Matt Ryan has shown that he is a top NFL quarterback by producing despite all of the injuries his offense has had to endure. WR Harry Douglas has stepped up nicely to fill the void at wideout. Backup RB Jacquizz Rodgers is still just a flex play, especially now that Jackson is back from his hamstring injury. Meanwhile, Atlanta’s defense is nothing special and should not be owned.

The Buccaneers are a mess. Their head coach is in the hot seat, they released starting QB Josh Freeman, and second year RB Doug Martin has suffered because of opposing defenses not respecting the passing game of Tampa Bay. The lone bright spot on this roster has been WR Vincent Jackson. He has continued to produce through all of the turmoil and is 9th in fantasy scoring for wideouts. The TE position is not worth mentioning and neither is the defense. There is very little fantasy value on this team, however, rookie QB Mike Glennon has attempted an inordinate amount of passes thus far and should be considered as a sleeper based on the sheer volume of attempts.

I see no reason why the Saints shouldn’t run away with the NFC South, despite the improved play of the Carolina Panthers who will finish the year at 10-6, just missing the playoffs. If the Falcons can find some offensive production, they have a chance to go a disappointing 8-8. Tampa Bay could win one or two games, assuring them a top five pick in the 2014 draft.

The final installment of my midseason report will be tomorrow, as I break down the AFC and NFC East divisions. Remember to Keep On Scramblin’ and hit me up on Twitter @MaahsScrambler with your fantasy inquiries.