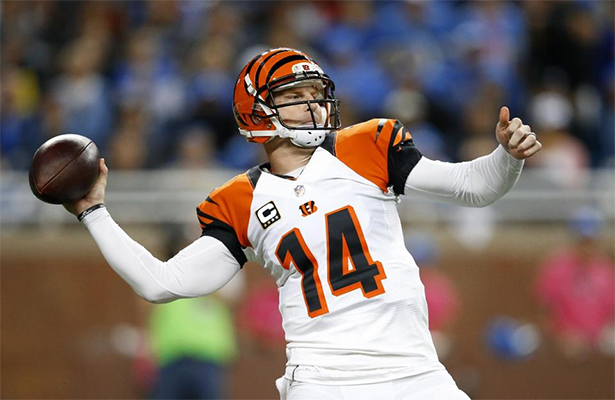 The Black and Blue division is being dominated so far by the Cincinnati Bengals who are 6-2 at the midway point of the season. The Ravens are in second at 3-4, followed by the Browns at 3-5 and the Steelers are dead last at 2-5 after losing to the Raiders on Sunday.

Cincy has compiled a good record behind the play of their QB Andy Dalton, their opportunistic defense, the electric WR A.J. Green, and the rookie RB Giovani Bernard has increased his production from being just a change of pace back to carrying the bulk of the load, although they didn’t run it much last week. TE Tyler Eifert has been somewhat disappointing having only scored one TD all year, and the “Law Firm” Benjarvis Green-Ellis has been a plodder with limited fantasy value. If you have room on your roster it might be worth it to grab WR Marvin Jones, just in case last Sunday’s 4 TD performance was not a fluke.

Baltimore has struggled with their identity in 2013, split between wanting Super Bowl winning QB Joe Flacco to shoulder more of the load and sticking to the ground game, which has been so productive in the past. Ray Rice has been a disappointment due to this identity crisis. WR Torrey Smith has emerged as a legit #1 fantasy wideout while the tight ends have been non factors in the passing game. The defense has not been able to recover from losing two future hall of famers in Ray Lewis and Ed Reed. I don’t see much fantasy value in this team going forward. Not even the back up to Ray Rice, Bernard Pierce, has been worth stashing on your roster.

If only QB Brian Hoyer wouldn‘t have injured his knee. That is what Browns fans will be saying when Cleveland finishes at the bottom of the AFC standings once again. After trading RB Trent Richardson, the Browns have been a nice surprise this year in fantasy. WR Josh Gordon has been awesome since coming off of suspension, rookie TE Jordan Cameron has lived up to his preseason hype, and the defense has proven to be very solid. The fantasy value of the Browns really drops off after that. QB Brandon Weeden has been terrible and subsequently benched in favor of Jason Campbell who had a nice game against the Chiefs last Sunday. I do not foresee Campbell having continued success the rest of the year however. Richardson’s replacement at RB, Willis McGahee, is not worth rostering at this point. In fact, there are no hidden gems to be found on this team going forward.

Finally, the Steelers look like an aging team with poor running back play. Not even QB Ben Roethlisberger is worth a spot on your bench unless you are in desperate need of a bye week spot start. The lone bright spot on this Pittsburgh team has been WR Antonio Brown who is the 15th highest scoring WR in fantasy. Rookie RB Le’Veon Bell has not been great coming off of injury and the defense has not been the typical automatic start as in years past. Tight end Heath Miller might be worth stashing if he can continue his recovery from off-season knee surgery.

From fantasy wasteland to fantasy wonderland we go. The NFC North has been filthy with fantasy production so far. Green Bay sits atop the division at 5-2, just ahead of the explosive Detroit Lions who eked out a win on Sunday to get to 5-3. Chicago is still in the hunt with a 4-3 record, while Minnesota brings up the rear at 1-6.

QB Aaron Rodgers is a top 5 quarterback even though he is now without injured WR’s Randall Cobb and James Jones. Jordy Nelson has stepped up to fill the gap on his way to being the 4th highest scoring wideout in fantasy. Rookie RB Eddie Lacy has emerged as a quality starter and should be the Packers’ go to guy on the ground from here on out, while his back up James Starks may be worth picking up in case Lacy gets injured. TE Jermichael Finley was doing a solid job so far until he got hurt against the Browns. WR Jarrett Boykin can now be rostered after producing for two weeks straight.

The Lions, as expected, have been led by Megatron at wide receiver. He had a monster game last Sunday with 329 yards and a TD. If only you got points for getting tackled on the one yard line. QB Matthew Stafford is a surprising 2nd in fantasy scoring for quarterbacks. The addition of RB Reggie Bush has helped this team become an offensive force. Back up RB Joique Bell is still worth stashing due to Bush’s penchant for injury. Detroit’s tight ends are garbage once again; however, the defense is solid and depending on the match up can score points with the best of them. WR Kris Durham is the only sleeper I would recommend picking up from this roster.

As for the Bears, Jay Cutler is out for a few weeks but I would not drop him quite yet. He should be back in time for the fantasy playoffs, so if the Cutler owner in your league has cut bait on Cutler, then quickly snatch him up and gain much needed depth for the playoffs. WR Brandon Marshall is once again a top 10 fantasy wideout, while Alshon Jeffery has been a wildly inconsistent target opposite Marshall. TE Martellus Bennett has been a solid option at tight end. RB Matt Forte has been above average, especially in PPR leagues. Stay away from QB Josh McCown while you wait for Cutler’s return. There are no sleepers on this team unless you need a spot start from their defense depending on match up.

Bringing up the rear are the Minnesota Vikings. Outside the obvious fantasy beast, Adrian Peterson, there are not too many options being offered by this roster. You know you are bad at QB when you sign and then start ex-Buccaneer Josh Freeman. The only other fantasy producer for the Vikings is WR/KR Cordarrelle Patterson, not so much for his receiving production but for his kick return abilities. The Vikings defense is bad and so is TE Kyle Rudolph. Stay away from this team, they are not good.

The Packers will once again claim this division on their way to the playoffs, while Chicago and Detroit battle for 2nd. I believe the Lions have the necessary pieces in place to beat out the Bears for a possible wild card berth. Meanwhile, the Vikings are playing for the top pick in next year’s draft.

Tomorrow catch my midseason review on the AFC and NFC South divisions. Remember to Keep On Scramblin’ and hit me up on Twitter @MaahsScrambler with any line up questions or fantasy advice you need.