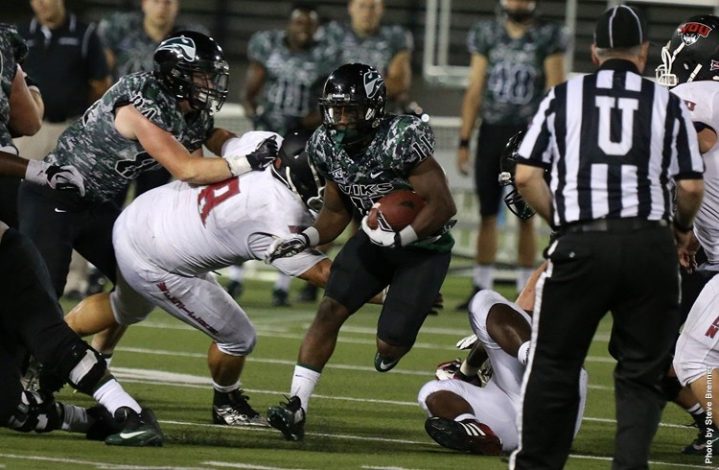 For the third straight year, Cal Poly’s triple-option offense befuddled the Portland State defense as the Mustangs pulled off a 42-14 win at Alex G. Spanos Stadium.

The Mustangs gained 470 yards on the ground against PSU, 531 overall as they built a 21-0 halftime lead, were up 35-0 at the end of the third quarter and cruised to the win. PSU had no answers for the seldom seen triple-option running game that Cal Poly features.

Meanwhile, Cal Poly’s defense was nearly as effective as its offense, holding the Vikings scoreless into the fourth quarter.

The Mustangs go to 1-2 on the season while the Vikings drop to 1-3. The game was played as a non-conference contest.

Quarterback Chris Brown led the offensive assault for Cal Poly, rushing for 159 yards and two touchdowns. He also completed four of seven passes for 61 yards and another score.

A rare defensive struggle took place early between the Vikings and the Mustangs. Outside of a 67-yard scoring drive by Cal Poly, neither offense could get untracked in the first 20 minutes of the game.

Portland State had a threat early in the second quarter, and took a chance on fourth-and-goal from the Cal Poly 2. But running back Shaq Richard was swarmed under by the Mustangs defense and Cal Poly took over.

Brown took advantage of that momentum, breaking away on a 57-yard run a few plays later. That ignited an 88-yard drive for the Mustangs. The sophomore quarterback eventually scored on a three-yard run and Cal Poly led 14-0 at the 8:38 mark of the second quarter.

Another lengthy scoring drive, a six-play, 87-yard march ended with a 32-yard TD run by Brown just before halftime.

At halftime, the Mustangs had 239 rushing yards, 267 yards in all. Brown had 133 rushing yards and two touchdowns on only seven carries. Meanwhile the Vikings had only 128 yards of offense.

A 27-yard touchdown run by Steven Long in the fourth quarter finally got the Vikings into the scoring column. Roston Tatumcaught a 17-yard TD pass from Kieran McDonagh in the final minute to complete the scoring.

Cal Poly carried the ball a remarkable 74 times. In addition to Brown’s 100-yard game was an 18-carry, 103-yard effort by Kori Garcia.

PSU finished with 286 yards of offense. Long and Rey Vega combined for 88 rushing yards in the fourth quarter. McDonagh completed just nine of 26 passes for 89 yards in the game.

GAME NOTES: Cal Poly now has a three-game winning streak over the Vikings. The Mustangs had big rushing games in the previous two seasons as well (341 yards in 2012 and 431 yards in 2013)… PSU has lost four straight road games dating to last season… Portland State has a bye next week. The Vikings return to play on Oct. 4 when they open Big Sky Conference competition, hosting UC Davis at Providence Park.

Hawks lose Saturday, Fall to 0-2 on the Season