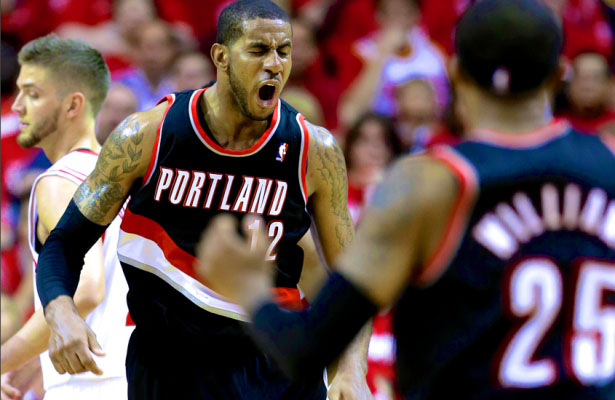 I’ll admit: I wrote a preview piece about this series and in the back of my mind I didn’t think the Portland Trail Blazers had a real shot to win it.

The Houston Rockets have two guys who have been to the finals in James Harden and Dwight Howard. They have size. They have experience. They generally play better defense.

But what do I know?

With two games in Houston over, the Portland Trail Blazers will come back home to Portland with a two-game lead and a head full of steam. There has already been a lot of action in this series, so what do we know now going into game three of the series?

LaMarcus Aldridge is completely unguardable. Period. In four games against the Rockers this season, Aldridge averaged 26.7 points and 15.5 assists per game. In two postseason games in Houston, Aldridge has wrecked the Rockets for 44.5 points and 13 rebounds per game.

Coach Kevin McHale has tried to change up who has to cover Aldridge, but he has seen a lot of success shooting over Dwight Howard, Terrence Jones and Omer Asik. As a team, the Trail Blazers are rebounding well and that gives Aldridge more time and energy to focus on scoring. If I were coach McHale, I would put more focus on getting rebounds, which would force Aldridge to fight for rebounds and likely put a brake on his mass-scoring.

Dwight Howard is a factor. But thanks to Aldridge, he’s a non-factor.

For example, the Miami Heat vs. Oklahoma City Thunder NBA Finals series a couple years ago, I cancelled out LeBron James and Kevin Durant because they are both 30+-point scorers. I cancelled out Russell Westbrook with Dwyane Wade because they were both 20+-point scorers. Who was my most important factor in that series? Power forward. Chris Bosh is light years better than Serge Ibaka in terms of pure scoring. And Bosh had a stellar series against the Thunder two years ago.

Back to Howard: He’s averaging 29.5 points, 14.5 assists and four blocks per game. The top player on the Rockets, Howard, is being outscored by Aldridge by 15 points. The slack for that was picked up by Chandler Parsons in Game 1, but Parsons could not keep that up in Game 2 and the Rockets lost by seven.

Speaking of non-factors. Another reason why the Thunder lost to the Heat in the NBA Finals a couple years ago is that James Harden does not always play well in tight situations. He was super successful in Oklahoma City because he was put in when they were already ahead. His ability to get to the free throw line is great for closing games, but his production falters when he’s under pressure.

The Rockets and Blazers have pretty dismal benches, but the Rockets are not doing themselves any favors by overplaying their starters and only playing three bench players. Five of Houston’s eight bench players did not see any time on the court.

Robin Lopez is simply outclassed by Dwight Howard and that’s okay. No one should be able to block Dwight Howard. Lopez is able to keep Howard from scoring by simply being annoying. On several of Howard’s missed hook-shots Wednesday, he shot too hard which is usually a product of frustration.

Damian Lillard is 23 years old, he’s playing in his first playoffs, and he’s on fire. Everywhere you look on the court, Lillard is either shooting the ball, passing the ball to the shooter, or getting in someone’s face. Lillard is averaging 24.5 points and eight rebounds per game.

Patrick Beverley is a pain in Lillard’s side, but whenever Jeremy Lin is in the game, it’s open season. Beverley held Lillard to just 3-14 shooting Wednesday night, but he found other ways to help his team, mostly with assists and in free throws.

In the second half of Game 2, the Rockets looked to be tired and frustrated. They game up a big layup to Wesley Matthews when they were in the middle of mounting a comeback in the fourth quarter, pretty much sealing the game. At the end, the ball was given to Jeremy Lin and the Rockets were down by five and Lin stood there in the middle of the court like he had no idea what was happening. The possession ended with a foul.

The Trail Blazers are a very streaky team and when they are hot, they’re very hot. Well the Blazers are on fire right now, and the Moda Center will be rocking. I do not expect the Blazers to give up Game 3 and they will be looking for a very doable sweep of the Rockets.