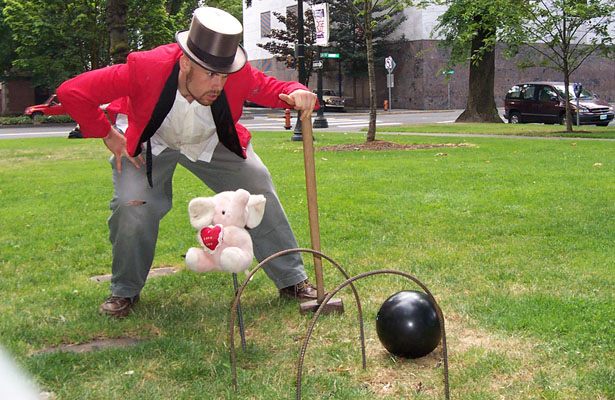 Anything England can do we can do better – and bigger.

Cricket? Please. I’d like to see those guys hit 500-foot homeruns off a 90-mph fastball.

While the Brits use baseball-sized orbs they quaintly tap with wooded mallets, a group of Portlanders have modified the Old English yard game into a destruction derby of debauchery: Mondo Croquet. 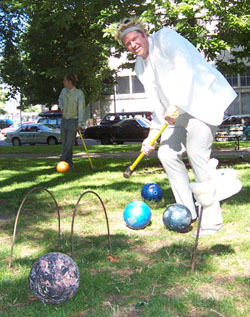 Zombies? You know it.

Mondo Croquet ain’t your grandma’s backyard game. This labor of love is more than a decade old and the World Championships are dropping on Portland’s North Park Blocks this weekend. But don’t think you need to have played beforehand to get in on the action – you don’t even need to have your own equipment.

“Just show up ready to make some friends, smack down your enemies and have fun,” says Founder Stephen Peters.

Peters founded this truly Portlandia event in 1997 with a friend. One day they simply pondered: “I bet it would be fun to play croquet with bowling balls and sledgehammers.” Thanks to Peters’ involvement with the Portland Cacophony Society, they rounded up a dozen others and a tradition was born.

Oh, yeah, did we mention the costumes?

We asked Peters to walk us through the details of Mondo Croquet. He fills us in on everything from playing around sleeping bums to getting Mondo Corquet in the Olympics.

How do the rules differ from regular croquet?

Other than the Zombie rules at the end we play very close to standard croquet rules. We often play with the rules slightly tweaked so the gameplay goes faster as we often have a lot of people who’d like to get on the pitch and play. (We) tend to optimize for fun.

As for Zombie rules, when the players complete the course they come back as brain-eating zombies who hunt down and kill off the other players. It’s an extra twist on the game that we find enjoyable.

The rules have stayed pretty much the same since the start. The goal is to have fun more than anything else so it’s OK for the rules to change a bit if all the people playing in a particular game approve. We’ll typically give kids two strokes per turn instead of one. Some people like to reset the stroke count after you go through a hoop. Some like to limit the total number of strokes you can accumulate. We have yet to implement a rule about yodeling.

Where do you hold the event each year?

Sometimes there’s a homeless person sleeping on the pitch during the first game. We just play around them until they wake up. It would be nice to have a closer restroom. People have to remember to pay for parking. Otherwise it’s great. Everyone knows how to find it. We always amaze and entertain people walking by. We usually get some out of town people who stumble across the game and join in. 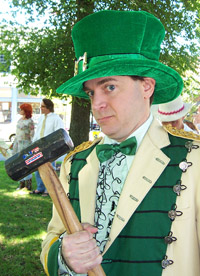 Why costumes and a picnic?

Probably about a third of the people we’ll see during the Championships come just to be part of the picnic. We’ve had full tea service, cucumber sandwiches and everything. It makes it more of an event. The rest of the year when we’re playing people just wear whatever’s appropriate for the weather.

How has Portland responded to Mondo Croquet?

We haven’t been on Portlandia (yet) but otherwise I’d say they’ve embraced it. People take the basic ideas and innovate on the themes. A number of people have Mondo Croquet sets and they set up games at other events. They customize their bowling balls, dress in fantastic and unexpected ways and occasionally find creative ways to cheat. We must be doing something right because people keep coming back: This is our 16th year.

Where do you see Mondo Croquet in the future?

I’m considering adding a fundraising part for a worthy cause. Some people have requested that the Championships be more structured with some kind of final playoff between the people who’ve won individual games. If some money got involved I’d like to see a port-potty. In general I want to continue to grow the number of people who play while keeping it fun.

What will it take to get this into the Olympics?

All pictures courtesy of  the World Mondo Croquet Federation.